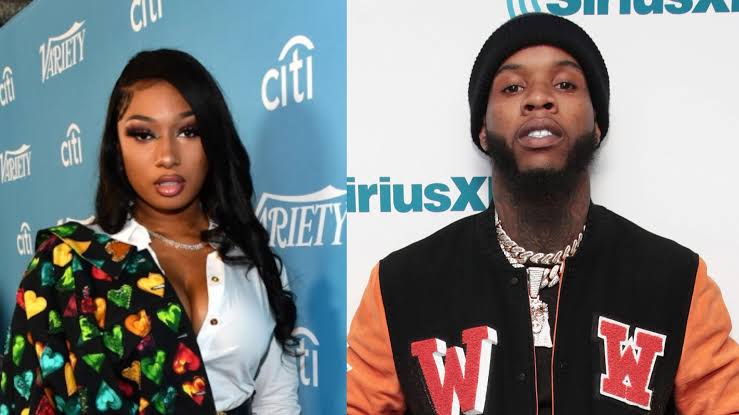 Megan Thee Stallion has finally confirmed rumours that it was Tory Lanez who shot her in the foot twice.

On Thursday night, the ‘Savage’ rapper took to Instagram Live to accuse the Canadian rapper and his team of making up lies about the July 12 incident in Los Angeles. Read previous reports here and here.

The 25-year-old rapper said she was scared to tell police about the incident as she thought they would kill them if they learned there was a gun in the car.

Megan also claims that she made an attempt to ‘spare’ Lanez, 28, by holding back the truth but got ‘tired’ of the rumors being spread by Lanez’ team.

‘You shot me and you got got your publicist and your people going to these blogs lying and s**t. Stop lying. Why lie.’

“I tried to keep the situation off the internet but you draggin’ it,”

“Motherf—ers [claiming that] I hit him — I never hit you! Motherf—ers are like, ‘She mad because he’s trying to f— with Kylie [Jenner] — no, I wasn’t.

“There’s only four mother—ers in the car: me, you, my homegirl and your security — everybody in the car is arguing,” she continues. “I’m in the front seat, he’s in the back. I get out the car, I’m done arguing, I’m walking away.

“This n—a, from the backseat, starts shooting me! I didn’t get cut on no glass! Let me tell you why they saying that. There’s a witness – when the police came… this did not happen at Kylie’s house, this happened damn near back at the house I was staying at.

“The police come, I’m scared — the police [have been] killing Black people for no reason. The police is really aggressive,’ Megan claims.

‘I didn’t want the police to shoot me because there’s a gun in the car.’

She said that the three others who were in the car with her – her friend, Lanez, and his security guard – were taken to jail but she went to the hospital.

‘You want me to be a bad person so bad, y’all want to believe the lie before you believe the truth,’ she added.

She then accused Lanez of being scared to tell people that he shot her and so had his team spreading lies.

‘Truth is you shot me. You’re scared to tell people you shot me and you got your whole team on the internet lying trying to cover your a**.

‘And I’m tired of it. Stop doing that, stop dragging me.

This comes just two days after she shared graphic photos of the injuries she sustained from the shooting incident.

3 foreigners who have been supplying weapons to bandits nabbed