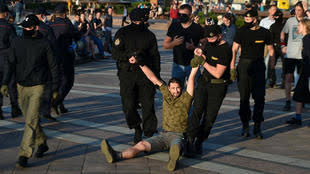 France recorded a new post-lockdown record of new Covid-19 cases on Sunday; the virus has also bounced back in Spain, Italy and Germany. Death rates remain low as the virus is mainly circulating among young people, but experts say social-distancing measures should be tightened to stop the pandemic severely affecting the more vulnerable elderly once more.

READ MORE: China cosies up to EU as US tensions high

France reported 4,897 new coronavirus cases on August 23 – the third time in the past week that the daily figure has surpassed 4,000, and the highest tally since the country emerged in May from the two-month lockdown that held the virus back. The score was down to 1,955 on Monday, although the number tends to be artificially low at the start of the week as there is a lag in processing results over the weekend.

In Spain a strict lockdown ending in May wrestled the caseload down, only for the coronavirus to bounce back from early July onwards, with the daily tally reaching 6,900 on August 22. The country’s worst-affected region, Catalonia, banned gatherings of more than 10 people on Monday to try to reduce transmission of Covid-19.

Confirmed new cases topped 1,000 in Italy on Sunday, the highest since the lockdown ended in May – just weeks after the figure was running at some 200 a day. Germany has also seen an uptick in cases over recent weeks, reporting on Saturday its highest daily number of new coronavirus cases since the pandemic’s peak in April.

Journalists and politicians have frequently referred to a resurgence in Covid-19 as a “second wave”. However, the World Health Organisation stated in July that this term is inaccurate and that it would be preferable to describe Covid-19 as having “one big wave”, seeing as the virus never went away and does not follow seasonal variations like influenza pandemics, such as the 1918-20 Spanish flu.

“The key thing is that Covid-19 never went away from these European countries, and when you get low levels of the virus still present, you release the lockdown measures and you get more people interacting, particularly indoors, it’s almost inevitable that you would see the cases go up,” Linda Bauld, a professor of public health at Edinburgh University, told FRANCE 24.

‘Covid disappeared from our minds’

“The fact that the proportion of positive tests is rising in Spain, France, Italy, Germany and the UK – and most sharply in Spain and France – suggests a real increase in the incidence of infection in all these countries,” explained Claire Standley, an assistant professor at Georgetown University’s Center for Global Health Science and Security, in an interview with FRANCE 24.

Covid-19 is four times more prevalent among under 40s than among over 65s in France. Most of the transmission is taking place at “festive” gatherings of young people without social-distancing measures, Véran said.

In Italy, the government shut nightclubs earlier in August due to clusters of young people catching Covid-19 there, while German public health body the Robert Koch Institute has said that a substantial number of its new cases are among returning holidaymakers, in particular young people.

Post-lockdown France has seen some instances of a generational clash – notably in Brittany last month, where a cluster of cases among beachgoers in their twenties prompted a livid reaction from the French government’s top official in the region, excoriating “irresponsible” young people “ignoring the danger”. Since then, illegal parties on weekends in Paris’ Bois de Vincennes park and a four-day, non-stop rave in early August in France’s southern Cévennes region have captured the media’s attention.

A French ARTE TV documentary broadcast in June titled The End of the Coronavirus? showed a group of young people at a Parisian café terrace refraining from social distancing and the use of face masks. “I think Covid has disappeared from our minds,” one of them said. “From the moment we could go out” at the end of the lockdown, it was like “the virus had gone”, she continued.

In much of western Europe, “it is largely the younger groups who are out and about, mixing, taking advantage of the lockdowns being released”, with gatherings of young people at “hospitality venues such as bars and at house parties” responsible for a significant number of coronavirus clusters, Bauld pointed out.

Many young people contracting the virus have been asymptomatic or experience fewer health problems. Indeed, the number of deaths per day has remained low in France – seldom exceeding 30 over the past couple of months. This figure was in the hundreds throughout the lockdown, surpassing 1,000 several times.

“Across Europe we’ve seen a very significant reduction in hospital admissions and the use of intensive care beds, and large reductions in deaths, largely because the increased infections are mostly among younger adults,” said Bauld.

In many countries “older people are being much more cautious, for good reason, because the risk is so much higher”, Lynn Goldman, dean of the Milken Institute School of Public Health at George Washington University, told FRANCE 24.

But while serious cases are relatively rare for the young, Georgetown University’s Standley cautioned that there are still “many examples of younger people, including those without known underlying illnesses, who experience severe disease, hospitalisation, and even death” – including a 16-year-old girl who became France’s youngest victim of the disease in March.

“As transmission rates rise within one age group, it is likely that there will be spillover to older, more vulnerable age groups as well, especially if transmission is widespread within the community and individual cases are not adequately tracked and traced,” Standley continued.

Despite such risks, European governments don’t want to impose lockdowns again – after the successful but gruelling confinements in the spring provoked brutal economic recessions. Emmanuel Macron ruled it out in France on August 20, telling Paris Match magazine that “we can’t shut down the country” again because it would cause too much “collateral damage”.

Instead, the French president continued, “local strategies” should be used to control the virus. On August 19, Toulouse became the first French city to make face masks compulsory in all outdoor places. Face masks were already compulsory on French public transport and enclosed public spaces, while many local councils – of beach towns like St. Tropez and Le Touquet, as well as big cities such as Paris and Lyon – have mandated them in busy outdoor areas. On a nationwide level, the French labour ministry recommends working from home for those who can do so.

Such measures will have to be tightened if France and its neighbours want to stop the pandemic spiralling out of control again, Standley argued, adding: “I am concerned countries in Europe are not acting more decisively right now, in light of increasing case numbers, to curb transmission. High levels of community transmission now – while people still can socialise outdoors and hopefully reduce (though not eliminate!) their risk of exposure – are what will drive exponential transmission in the coming weeks and months.”