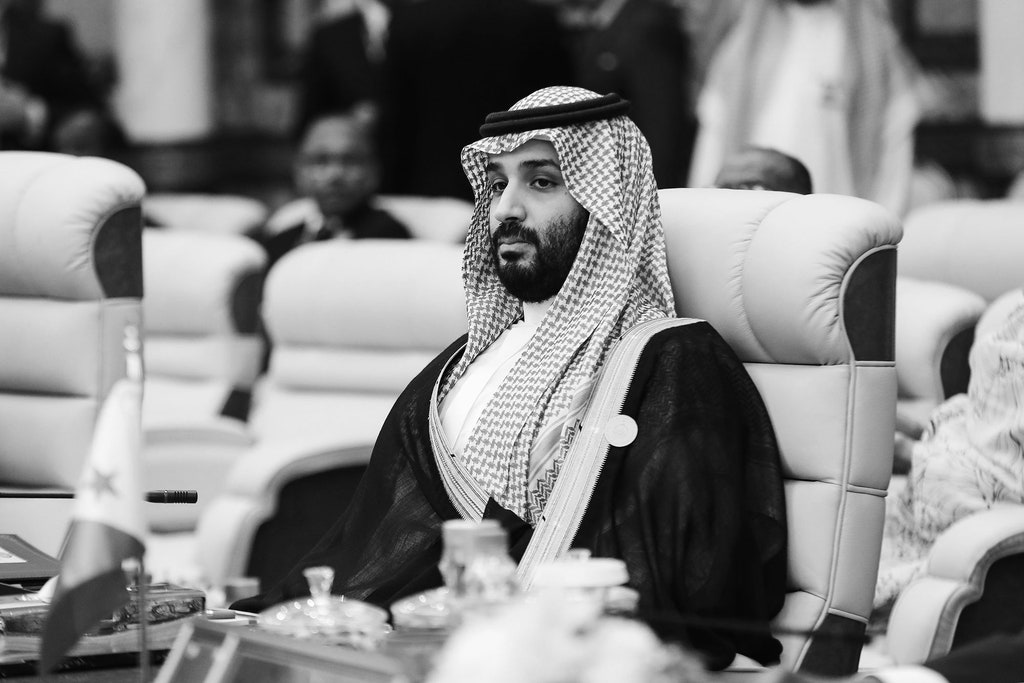 Prince Sultan bin Turki II was cut off from the Saudi royal family’s cash flow after criticizing the regime. So he appealed to Prince Mohammed bin Salman for help—and was never seen again.

Something wasn’t right about Captain Saud. Sitting on a fine-grained leather couch in the custom wood-paneled cabin of his Boeing 737-800 in Paris, he had the outward appearance of a pilot. His uniform was crisp, his demeanor confident and friendly. He cracked jokes and showed pictures of his children to staffers of the VIP he was supposed to fly to Cairo, a Saudi prince named Sultan bin Turki II.

But little things seemed off. One member of the prince’s entourage was a recreational pilot, and Saud couldn’t keep up with his small talk about 737 pilot training. The captain’s plane had a crew of 19, more than double the usual number of staffers. And the crew was all men, some a little burlier than you’d expect. Where were the leggy European blondes who were fixtures on Saudi Royal Court flights?

Then there was the watch. Saud was fascinated by the Breitling Emergency watch the prince’s companion wore. “I’ve never seen one of these,” he said, in perfect English.

The $15,000 watch, with a radio beacon to summon help in a crash, is a favorite indulgence of pilots with disposable income. What kind of airplane captain had never seen one? And what kind of pilot wore the Hublot that Saud had on, a showy hunk of metal that would cost three months’ salary for most pilots?

The watch, the 19 men, the lack of flying knowledge—the dissonances added up. Sultan’s security detail warned the prince: Don’t get on the plane. It’s a trap.

But Prince Sultan was tired. He missed his father, who was waiting for him in Cairo. And Mohammed bin Salman, the son of the king, had sent this plane. Sultan figured he could trust his newly powerful first cousin, who had maneuvered himself out of obscurity to become the most powerful member of the royal family after the king.

Sultan bin Turki II, like Prince Mohammed, is a grandson of Saudi Arabia’s founder. Sultan was born on the family’s troubled fringe. His father, Turki II (named because the founder had two sons named Turki), seemed a potential heir to the throne until he married the daughter of a Sufi Muslim leader. Many in the royal family consider Sufis’ mysticism an affront to their conservative strain of Islam, and they shamed Turki into exile. He moved into a Cairo hotel where he remained for years.

Sultan, though, maintained relations with powerful relatives in Saudi Arabia. He married his first cousin whose father, Prince Abdullah, would become king. But in 1990 she died in a car accident, and the 22-year-old Sultan adopted the life of a libertine.

On his generous allowance from his uncle, then King Fahd, Sultan traversed Europe with an entourage of security guards, models, and fixers. The aging king had a tolerance—even a fondness—for high-living princes, and enduring affection for his nephew. When Fahd left a Geneva hospital after a 2002 eye surgery, Sultan was right behind his wheelchair, a privileged position among royals jostling for physical proximity to the king.

Sultan didn’t have a government role, but liked to be seen as a person of influence. He spoke with foreign journalists about his views on Saudi policy, taking a more open stance than most princes but always supporting the monarchy. In January 2003 he veered onto a different tack. Sultan told reporters that Saudi Arabia should stop giving aid to Lebanon, and claimed Lebanon’s prime minister was corruptly using Saudi money to fund an extravagant lifestyle.

Internationally, the statement didn’t seem like a big deal. Sultan was hardly the first to accuse Prime Minister Rafic Hariri of corruption. And the prince didn’t criticize the kingdom as much as Lebanon.

Inside the Royal Court it amounted to a Molotov cocktail. The Hariri family had deep ties to Saudi Arabia’s rulers, and especially to King Fahd’s powerful son Abdulaziz. Sultan’s statement seemed directed at antagonizing Abdulaziz. A few months later Sultan faxed a statement to the Associated Press saying he had started a commission to root out corruption among Saudi princes and others who “pillaged the nation’s wealth over the past 25 years.”

About a month later, Abdulaziz sent Sultan an invitation: Come to King Fahd’s mansion in Geneva. Let’s work out our differences. At the meeting, Abdulaziz tried to coax Sultan to return to the kingdom. When he refused, guards pounced on the prince, injected him with a sedative, and dragged him onto a plane for Riyadh.

Sultan weighed about 400 pounds, and either the drugs or the process of dragging the unconscious man by his limbs damaged nerves connected to Sultan’s diaphragm and legs. He spent the next 11 years in and out of Saudi prisons, sometimes in a locked-down government hospital in Riyadh.

In 2014 Sultan contracted swine flu, and later life-threatening complications. Assuming the prince, now a semiparalyzed, wheezing shadow of his antagonistic younger self, was no longer a threat, the government let him seek medical care in Massachusetts. As far as Sultan was concerned, he was free.

Massive change swept the House of Saud during Sultan’s captivity. King Fahd died in 2005, and his successor Abdullah—the father of Sultan’s late wife—had less tolerance for ostentatious displays of princely wealth. Abdullah trimmed handouts to princes and censured the most profligate and ill-behaved.

But Sultan seemed not to grasp that shift or the bigger one in early 2015, after he’d recovered from his acute health problems, when even-more austere King Salman assumed the throne. Instead of fading into a low-key life, Sultan got liposuction and cosmetic surgery and started getting the band back together to resume his life of vagabond opulence.

Sultan reached out to security guards and old advisers, people he hadn’t spoken to since his kidnapping more than a decade earlier. With the entourage reunited, Sultan set out for Europe like a Saudi prince of the high-flying 1990s.

With armed guards, six full-time nurses and a doctor, rotating “girlfriends” hired from a Swiss modeling agency, and an international assortment of hangers-on, Sultan spent millions of dollars a month. From Oslo to Berlin, Geneva, and Paris, the modern-day luxury caravan ate only the finest food and drank only the best wine. After a few days or weeks in a city, Sultan would order butlers to pack his bags and call the Saudi embassy for an escort to the airport. They’d hop on a rented plane and set out for the next city.

In mid-2015, Prince Sultan took over a luxurious hotel on Sardinia’s most picturesque beach. Swimming in the Mediterranean, Sultan’s partially paralyzed lower legs could support his weight. It was the closest he got to moving freely.

Along the way, the Royal Court kept depositing money in Sultan’s bank account. The prince realized the payments would eventually stop, and he didn’t have other income. So he developed a plan: Sultan decided the Saudi government owed him compensation for the injuries from his 2003 kidnapping. They made it difficult to start a company or an investment fund the way his other princes could.

Sultan appealed to Mohammed bin Salman. He didn’t know Mohammed well. He’d been locked up since the younger prince was in his late teens. But he heard from family members that Mohammed had become the most powerful person in the Royal Court, and asked Mohammed for compensation for his injuries.

It didn’t work. Mohammed was unwilling to pay someone who had brought about his own troubles by airing family grievances. What kind of lesson would that teach other royals? So in the summer of 2015, Sultan did something unprecedented: In a Swiss court, he sued members of the royal family for the kidnapping.

His confidants were worried. “They abducted you once. Why wouldn’t they abduct you again?” warned Sultan’s lawyer in Boston, Clyde Bergstresser. Sultan often followed the advice of Bergstresser, a blunt New Jersey native who was referred to Sultan during his medical treatment in Massachusetts. The lawyer didn’t have the baggage of other Saudi connections, and spoke to Sultan more directly than members of the prince’s retinue would. But on this point Sultan was obstinate. He insisted on filing the suit. A Swiss criminal prosecutor started investigating. Newspapers picked up the story. Sultan’s payments from the Royal Court abruptly stopped.

Sultan’s entourage didn’t realize the problem for weeks, until the prince one day ordered room service in his Sardinian hotel. The restaurant refused to serve them.

It fell to a member of the entourage to tell Sultan why. “You’re absolutely broke,” his staffer explained.

The hotel would have just evicted the prince but couldn’t afford to write off $1 million or more in unpaid bills from the prince’s weeks-long stay. Sultan told his staff he could get the Royal Court to restore his payments. The hotel reopened the line of credit, and Sultan took a gamble: He tried to outmaneuver Mohammed bin Salman.

In the Saudi royal family the brothers of the king have a say in the line of succession. If a king proves inept, his brothers can remove him. So Sultan sent two anonymous letters to his uncles. Their brother King Salman, he wrote, is “incompetent” and “powerless,” a puppet of Prince Mohammed. “It is no longer a secret that the most serious problem in his health is the mental aspect that has made the king the subject of his son Mohammed.”

IPOB: We can’t back out now we must get ‘Biafra’ – Nnamdi Kanu