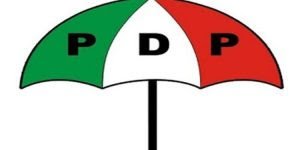 AS campaigns for the Edo State governorship election fixed for 19, September 2020 continues, the Peoples Democratic Party (PDP), has again raised the alarm over the continuous attack on its supporters and members by political thugs allegedly recruited by the All Progressives Congress (APC).

Edo State Publicity Secretary of the PDP. Mr. Chris Nehikhare, who raised the alarm Sunday in Benin at a press conference, said that the APC were using the thugs to harass and intimidate members of the party to cause mayhem and have the election postponed.

He said, “We have been preaching peaceful election since our campaigns started unlike our opponent, the APC which has upped the ante to cause violence so that the election will be postponed

“At Agbede in Etsako West Local government area on last Thursday, our people were attacked viciously in the residents of one of our leaders. Jah Usman. This was inside and not outside his compound.

“Eleven armed men broke into the compound and shot sporadiccally, destroyed vehicles and inflicted injuries on about ten people.

“According to the Divisional Police Officer (DPO) in the area, two people have been arrested and they have confessed that they were sent by APC leaders to cause mayhem aimed at reliasing their agenda of having the election postponed”.

He also disclosed that on Friday at Ekpe,Ward 3 in Akoko – Edo local government area, PDP members and supporters were attacked viciously.

He stated that the men who wore masks were allegedly in convoy of APC governoship candidate when the incident occured, adding that eleven people mostly elderly were injured.

However, the APC through Mr. John Mayaki, the Chairman of the Edo APC Media Campaign Council, while denying the allegations, said that the IG’s warning on politicians arming thugs, staging violence affirms petitions against PDP, an Obaseki

“The Election Security Threat Analysis report of the Police warning of violence in the Edo Governorship election due to politicians’ importation of arms and thugs is an affirmation of our previous petitions and warnings on the criminal arms build-up by Governor Obaseki and the PDP.

“The party reacted to the new report made public by the Inspector General of Police, Mohammed Adamu, which warned of the occurrence of violence and other illegalities during the election due to several indicators including arming and movement of political thugs, use of inciting statements during political campaigns, high likelihood of violence and possible cross attack by political opponents, misinformation/disinformation aimed at heating-up of the polity, among others”.

How 4ft Snake was pulled out from a woman’s throat