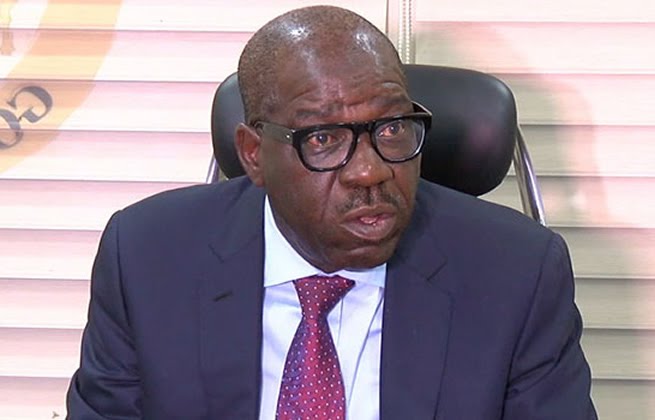 Edo Butchers on Wednesday shut down abattoirs, meat markets and shops in the state in solidarity for the re-election of Governor Godwin Obaseki.

The butchers took to major streets in Benin with a life cow to demonstrate their trade in solidarity with the state governor with their usual slogan of 4+4 and re-echoing of ‘Togba’ meaning complete.

Iexclusivenews reports that the President, Association of Edo State Practicing Butchers, Paul Odigie, said they were out to drum support for Obaseki based on his achievements in the state.

According to him, the governor has done well and should be given the opportunity to continue and complete the good work he has started in the state.

He went further to say “We the Edo butchers have agreed in totality that Obaseki deserves a second term untill 2024 because of his developmental strides and laudable programmes for butchers.

“Today, we have shutdown our abattoirs and other meat shops and meat sellers across the various markets in the state to endorse and to say we are 100 per cent with Obaseki.

“Since the inception of his administration, butchers in Edo have known peace,” Mr Odigie said.

“There is no thuggery and there is no extortion because of his support and belief that market people are the ones that move the economy.”

He said any attempt to circumvent the will of the people would be vehemently resisted.

“We are using this medium to reach out to the entire butchers in the state and our supporters as well as the prospective buyers and meat consumers to mobilise and vote for Governor Obaseki.

“A vote for Obaseki is moving the meat market in Edo to the next level, just like the Brazilian meat industry,” he said.

Responding, the Chairman of the Nigeria Union of Journalists, Edo Council, Roland Osakue, commended the group for their peaceful rally.

“Do not allow miscreants to infiltrate into your midst. We owe it a duty as citizens to protect government property which belong to all of us,” the NUJ chairman said.