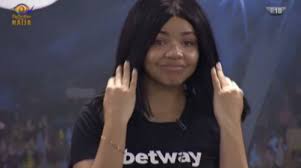 BBNaija 2020: Nengi Emerges Head Of The House 48hrs to End The Show

It was announced today, the 25th of Sept., 2020, during a meeting at the lounge where the reasons Team Sports Development emerged winner were detailed out.

The winners of the  Betway MAD Challenge were awarded a grand prize of N500,000.

Further into the meeting, the housemates were ecstatic when Team Black (Laycon and Dorathy) emerged winners of the Betway Trivia Games and were awarded a Grand Prize of N1m and a hangout session with Don Jazzy.

Nengi was offered the Head Of House position for which she gladly accepted and was immediately crowned the new Head of House. She therefore became the first and the last HOH of the BBnaija Liveshow Season Five.