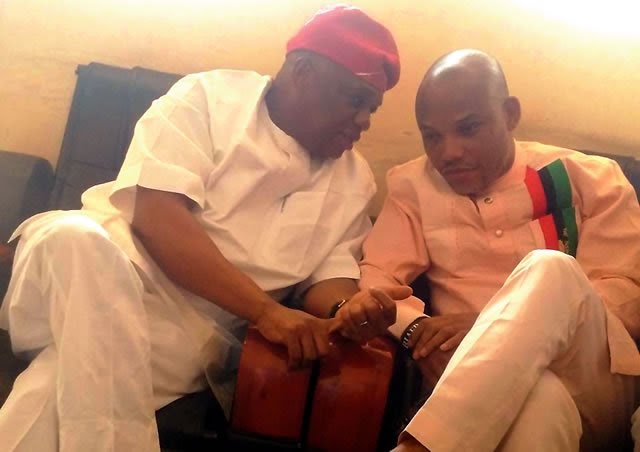 The Senate’s Chief Whip, Senator Orji Uzor Kalu, paid a visit to Nnamdi Kanu, the leader of the Indigenous People of Biafra, who is being held by the Department of State Services.

iexclusive News Nigeria reports that Kalu, in a Facebook post, stated that he had a conversation with the IPOB leader, whom he met in good health and care.

Whether Kanu listens or not, the Senator said he will continue to counsel him as he has in the past.

“This afternoon, I paid a visit to my brother, Maazi Nnamdi Kanu, who is detained by the DSS in Abuja,” he said. I met him in good health and took care of him, and we talked as ‘Umunne.’

“When I was Governor in 2001, I appointed his father, Eze Israel Okwu Kanu, as traditional ruler of Akwara Ukwu, and the family has remained close to me ever since.”

“I understand that Nnamdi has a huge following back home, so I asked him to think about the ramifications of his actions and words for the sake of those same people.”

The Department of State has issued a warning about rebels’ plans to target military bases in border towns.

Kanu: CNG demands an audience with Buhari following the visit of an Igbo delegation.

“Even though my and his ideologies are diametrically opposed, God has made us brothers, and we can’t avoid each other.”

“I owe him and Nigerians sound advice…

Whether or not he and his family pay attention to me, I will continue to counsel him as I have in the past. The most important thing we require is a peaceful and safe society.”

The DSS is holding Kanu after accusing him of terrorism and treasonous felony.