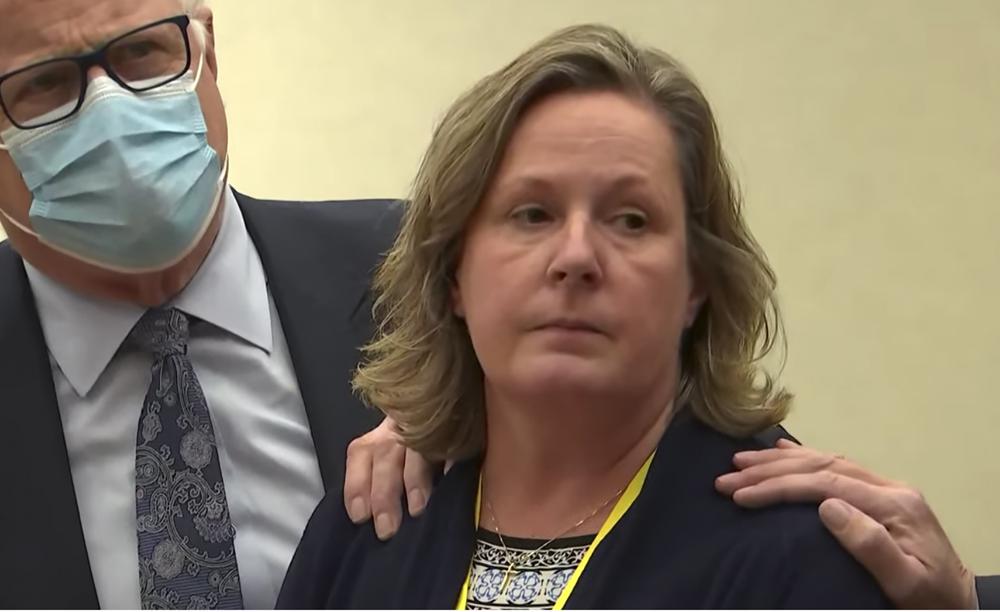 Kim Potter, a suburban Minneapolis police officer who claimed she mistook her handgun for her Taser, was convicted of manslaughter in the death of Daunte Wright on Thursday.)

Daunte’s parents were moved to tears, as supporters outside the courthouse chanted “Guilty, guilty, guilty!”

Kim Potter, a former Brooklyn Center officer, was found guilty of first-degree and second-degree manslaughter after the mostly white jury deliberated for about 27 hours over four days.

Under the state’s sentencing guidelines, Kim Potter, 49, faces about seven years in prison, but prosecutors have said they will seek a longer sentence.

Judge Regina Chu ordered Potter to be taken into custody and held without bail until her Feb. 18 sentencing.

Potter was released on $100,000 bond on the day she was charged last April, three days after she killed Wright and a day after she resigned from the police force.

A Potter family member in the courtroom yelled “Love you, Kim!” as she was led away in handcuffs. Potter’s attorneys left the courthouse without commenting and did not return phone calls or emails.

As the verdicts were read, the dozens of people who had gathered outside the courthouse erupted in cheers, hugs, and tears of joy.

“When the Saints Come Marching In” was performed by a New Orleans-style jazz band. Two men jumped up and down, holding each other’s shoulders, and then others started jumping up and down and chanting “Guilty, guilty, guilty!”

When the verdicts were read, Potter, who testified that she “didn’t want to hurt anybody,” looked down with no visible reaction. Potter made the sign of the cross as Chu thanked the jury.

Potter’s attorneys argued that she should be released until she is sentenced because she is not going to commit another crime or go anywhere.

“It’s the Christmas season,” Potter’s attorney, Paul Engh, argued. “She’s a devout Catholic, no less, and incarcerating her at this point is pointless.”

Chu, on the other hand, rejected their arguments, saying she “cannot treat this case any differently than any other case.”

Potter, who didn’t smile in court, had a big grin on her face in a mug shot taken after the trial when she was processed at a women’s prison.

After Potter was led out of the courtroom, prosecutor Erin Eldridge hugged a tearful Katie Bryant, Wright’s mother and a frequent presence at the trial, and Wright’s father. Attorney General Keith Ellison, whose office handled the prosecution, hugged the parents as well.

It was the second high-profile police officer conviction won this year by a team led by Ellison, which included some of the same attorneys who helped convict Derek Chauvin in George Floyd’s death in the same courtroom just eight months earlier.

After the verdict, Ellison said outside the courthouse that it provided Potter with some accountability but fell short of justice.

“Justice would be bringing Daunte back to life and reuniting the Wright family,” Ellison explained. “For Daunte, justice is beyond our reach in this life.” But accountability is a critical, necessary step on the road to justice for all of us.”

Ellison expressed sympathy for Potter, who he described as a “esteemed member of the community” before being convicted of a serious crime.

Ellison’s mother hugged Wright and said the verdicts triggered “every single emotion that you could imagine.”

“Today we got accountability, which is what we’ve been asking for since the beginning,” Katie Bryant said, thanking supporters for keeping the pressure on.

“We love you, we appreciate you, and we honestly couldn’t have done it without you,” she explained.

The time stamps on the verdicts showed that jurors agreed on the second count on Tuesday before asking the judge what to do if they couldn’t agree that afternoon. At 11:40 a.m. Thursday, the jury returned a guilty verdict on the more serious first-degree count.

Potter, who is white, shot and killed Wright, 20, during a traffic stop in Brooklyn Center on April 11 while she and other officers were attempting to arrest him on an outstanding warrant for weapons possession.

The shooting occurred during a period of high tension in the area, as Chauvin was on trial in nearby Minneapolis for Floyd’s death.

Jurors were shown video from police body cameras and dashcams of the shooting. Potter repeatedly threatened to tase Wright as another officer attempted to handcuff him before drawing her handgun and shooting him once in the chest.

“(Expletive)! I had just shot him… “I grabbed the wrong (expletive) gun,” Potter admitted on video to the jury. “I’m going to prison,” she said a minute later.

During her sometimes tearful testimony, Potter apologized to the jury and said, “I’m sorry it happened.

” She described the traffic stop as “chaotic.”

The maximum sentence for first-degree manslaughter is 15 years in prison.

When multiple counts involve the same act and the same victim, Minnesota law sentences defendants only on the most serious conviction, and state guidelines call for approximately 7 years on that charge.

Prosecutors have stated that they will seek to establish aggravating factors that warrant an upward departure from sentencing guidelines.

In Potter’s case, they claimed that her actions put others in danger, including her coworkers, Wright’s passenger, and the couple whose car was hit by Wright’s after the shooting.

They also claimed she abused her authority as a cop.

Prosecutors had to prove that Potter killed Wright while committing a misdemeanor, in this case,

“reckless handling or use of a firearm so as to endanger the safety of another with such force and violence that death or great bodily harm to any person was reasonably foreseeable.”