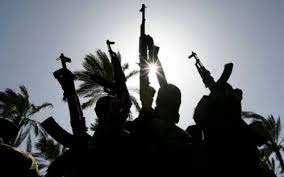 iexclusive News Nigeria reports that according to locals, the attacks began late on Saturday, Christmas Day, and continued into the early hours of Sunday, December 26.

The bandits assaulted Geba, Gidan Kaura, and Gidan Kada villages, as well as certain settlements in the Gusau Local Government Area, according to a BBC Hausa report.

They fled to Damba, a town inside the state capital, because there were no security agents in the villages to resist the robbers, according to a local.

“We have women, children, and the pregnant ones, there is no food. If you see where they sleep in this cold as if there is no government,” the local alleged.

Another local, Malam Shehu Kura, who escaped to the Damba area in Gusau, told Punch that the bandits, who were on motorcycles, moved from village to village on Sunday, looting shops and houses.

He said that the bandits operated for many hours in the seven villages without the intervention of security agents.

“They were in the area for many hours; they searched from house to house, looking for food items and other valuables.”

The witness said the bandits abducted 33 women and carried away a lot of food items.

“They abducted 10 women from Kura village, nine from Bayawuri, seven from Gana and another seven from Doma,” he added.

The resident also explained that 10 people were shot dead by the bandits when they tried to escape, while several others sustained injuries.

Kura explained that the people of the seven affected villages fled to Gusau town, adding that most of the victims were squatting in unfavourable conditions due to lack of accommodation.

“Most of us sleep outside or in open places despite the harsh condition of the harmattan because we have no other alternative.”

He appealed to the authorities to come to their aid, lamenting that most of the victims were women and children.

One of the residents told BBC Hausa that some of the abducted victims include young girls.

“They took 10 women in Kura village. In Bayauri, we knew they took nine women including young ladies, while seven women were taken in Gana and went to Duma and abducted another seven in the early morning of yesterday Sunday,”

The Commissioner of Information in Zamfara State, Ibrahim Dosara, who confirmed the attacks, however, said that only Geba town was attacked.

He explained that shortly after the bandits’ attack, security agents went to rescue the situation.

“There are soldiers working in that zone, they went to Geba. They met three people injured. The soldiers dispersed the bandits.” he said.

The commissioner said it was not true that the villages that were attacked were not visited by security agents on a rescue mission.

In a video posted on Facebook, survivors, some of the injured, recounted their ordeal. See screenshots below: