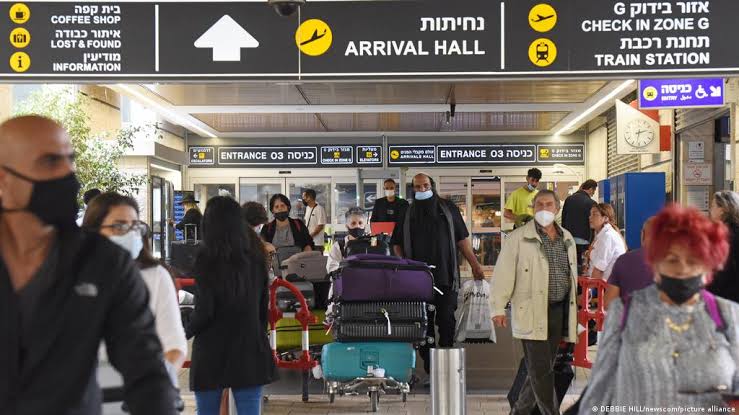 Omicron: Israel To Move Nigeria From “Red” To “Orange” List

Israel has announced that it will move Nigeria from the “red” to “orange” list, a move that has seen countries around the world reduce the hawkish nature towards Nigeria and other African nations towards fear of the virus.

This was disclosed by Israel’s government on Monday, after it admitted it will start admitting people with covid immunities from countries it sees as high risk disclosed by Reuters.

They announced that visitors must prove they are vaccinated before entering the country.

Isreal Health Ministry reported that foreign travellers from 199 “orange” countries will be admitted if they can prove they are vaccinated or have recovered from COVID-19, adding that Nigeria, alongside 15 other countries that were listed on the red list are now on the orange list

The Health Minister, Nitzan Horowitz said Israel would adjust its criteria for compulsory testing and focus primarily on people at high risk. Subsequently, more Israelis “will be required to exercise personal responsibility and perform tests at home”, he said in televised remarks on Monday.

iexclusive News Nigeria reported earlier that UK’s Prime Minister, Boris Johnson said that new measures are not necessary for now in Britain to fight the latest coronavirus Omicron variant, which in his words, is “plainly milder” than earlier forms of the coronavirus variant.