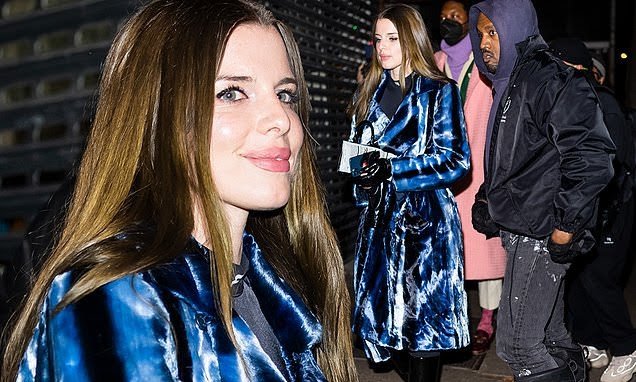 Kanye West and Julia Fox were spotted out on a date at Jeremy O. Harris’ “Slave Play” on Broadway with a group of friends on Tuesday January 4.

Kanye and Fox had dinner at Carbone. Page Six reported that this is the couple’s first date night in New York where “Uncut Gems” actress Fox is based, following a few evenings out in Miami.

Kanye and Fox were spotted leaving August Wilson Theatre for Carbone, after the “Slave Play” performance.

West, 44, and Fox, 31, were first seen out in Miami Saturday night dining at Carbone’s location in that city. A source told TMZ at the time that the date was “nothing serious,” and Fox, when asked by a paparazzo the next day if there was a second date in the cards for the pair, said, “I don’t know.”

Kanye West And Julia Fox Spotted On A Date

“Julia and Ye are dating,” a source close to Fox told Page Six exclusively. “They both just got out of their former relationships, and they’ve helped each other recover immensely. “They’re kind of kindred spirits, and it’s cool to watch.”

While Kanye West is in the middle of a divorce from Kim Kardashian, Fox is rebounding from her split with the father of her son, Peter Artemiev. It is still unclear if West’s recent and very public pleas for reconciliation with Kim will affect his relationship with Fox.

Harris’ “Slave Play” set a Tony record this year with 12 nominations, including best play though he wound up losing every single one. The show runs through Jan. 23.

Kim Mi-soo, a Disney+ Snowdrop actor, died’suddenly’ at the age of 29

See Who Will Be The Next Olubadan Of Ibadan