iexclusive News Nigeria reports that the richest billionaire in Africa popularly known as Aliko Dangote has reacted to the side chic fracas setting the social media on fire.

This online news medium understands that there have been two ladies who have disclosed they are in a romantic relationship with the billionaire. This has been the talk of the town as Bobrisky has also jumped in to save him from social media trolls. The US mistress known as Bae Lewis shared a touching story about how her heart was broken by Dangote.

The second side chic called Allrounder also shared a photo of herself with a heavy backside. In her caption, she called out Bae Lewis to link up since they all share the same man.

To clear the air, Allrounder has shared screenshots of chats with her sugar daddy Dangote refuting claims of dating Bae Lewis. This has turned into controversies because the person involved is a high personality.

In the screenshot sighted a contact number with the name Big Daddy Aliko, sent a message indicating that he has never had any encounter with the US-based mistress.

He added that she is just a thug who is chasing clout, hence should be disregarded. It’s not confirmed though if the contact number is that of Dangote because there are images of the US mistress with him.

She’s not only looking for attention but she’s a hungry thug. Never dated her,

See the screenshot below: 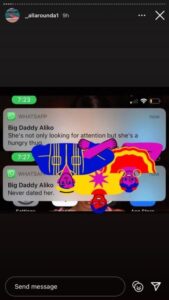