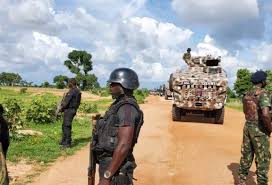 iexclusive News Nigeria reports that two persons have been confirmed dead as nine passengers abducted by kidnappers along the Kaduna-Abuja road regained freedom following the intervention of troops of Operation Thunder Strike.

The kidnappers had launched an attack on the commercial bus, shooting sporadically at it, forcing the driver to halt the journey at the Akilubu-Gidan Busa end of the Kaduna-Abuja road at 4 pm yesterday.

This online news media gathered that two victims were identified by the passengers to be the driver and another passenger who sat beside the driver before the kidnappers attacked the bus with number plate Kaduna: MKA-151.