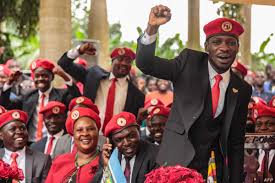 iexclusive News Nigeria reports that Ugandan police Wednesday denied arresting presidential aspirant, Bobi Wine, as he tried to campaign ahead of next month’s tense election, saying instead the singer-turned-MP had been “restrained” and returned home.

Wine’s campaign team said the opposition leader and his entire support crew had been arrested in Kalangala, a district near Lake Victoria, while drumming up support for his bid to unseat veteran President Yoweri Museveni on January 14.

Police accused Wine’s party of making “false claims” about the incident, saying campaign workers had been arrested for inciting violence but the candidate himself was not booked.

“We would like to clarify that the candidate was restrained for continuously holding massive rallies amidst the increased threats of coronavirus, in total disregard of the electoral commission and ministry of health guidelines,” police said in a statement on Twitter.

He was being “transferred to his home” in Kampala some 100 kilometres (60 miles) away, police added.

Wine, who has campaigned on a platform of ending Museveni’s 35-year stranglehold on power in Uganda, has been arrested numerous times on the hustings and placed under house arrest for alleged breaches of electoral rules.

His rallies, which often draw huge crowds, have been broken up with tear gas, riot police and live rounds, and Wine has taken to wearing a bullet-proof vest and armoured helmet on the campaign trail.

In November, security forces shot and killed at least 54 people over two days for protesting against Wine’s arrest, according to an official toll.

Museveni, who seized power at the head of a rebel army in 1986 and has ruled uninterrupted ever since, described most of those killed as rioters.

Opposition activists have complained that Museveni has been permitted to speak to large crowds without apparent breaches of coronavirus regulations, while similar rallies by Wine supporters have been violently shut down.