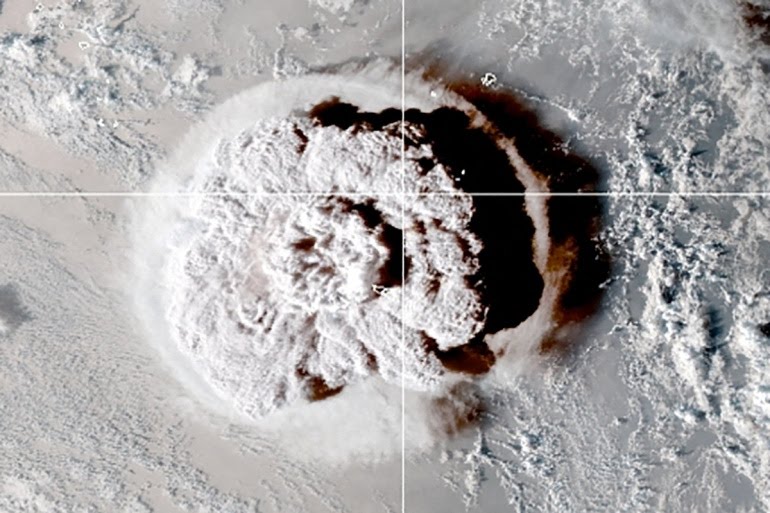 Tsunami – Tongans have fled to higher ground after an undersea volcano erupted, sending tsunami waves crashing onto the South Pacific island and prompting warnings as far away as the United States’ West Coast.

iexclusive News Nigeria reports that according to Australia’s Bureau of Meteorology, a tsunami wave measuring 1.2 metres (4 feet) was observed in Tonga’s capital Nuku’alofa.

The volcano erupted near the remote island nation of Tonga, causing a chain reaction of warnings and strong waves as far away as the United States.

On Saturday, an underwater volcano erupted near the remote Pacific nation of Tonga, causing tsunami warnings to be issued across the Pacific and for the West Coast of the United States, as well as strong waves and currents in many coastal areas.

The eruption of the volcano was spectacular, sending plumes of gas and ash thousands of feet into the atmosphere, though initial reports of damage were limited.

There were no immediate official reports on the extent of injuries or damages, but internet service in the country was disrupted, making it difficult to assess, according to The Associated Press.

In the United States, officials urged residents of coastal areas along much of the West Coast, Alaska, and Hawaii to evacuate to higher ground.

The National Weather Service in Portland, Oregon, predicted one- to three-foot waves in parts of Oregon and Washington. “The first wave may not be the highest,” the agency said on Twitter, and later waves may be “larger.”

A tsunami advisory was in effect for Hawaii, Alaska, the US Pacific coast and Japan. Be safe! #Tsunami

How Gustaf Al Ghozali, 22, Made $1M By Selling NFT Selfies On OpenSea

Obi Cubana Opens Up On Being A ‘Drug Lord’