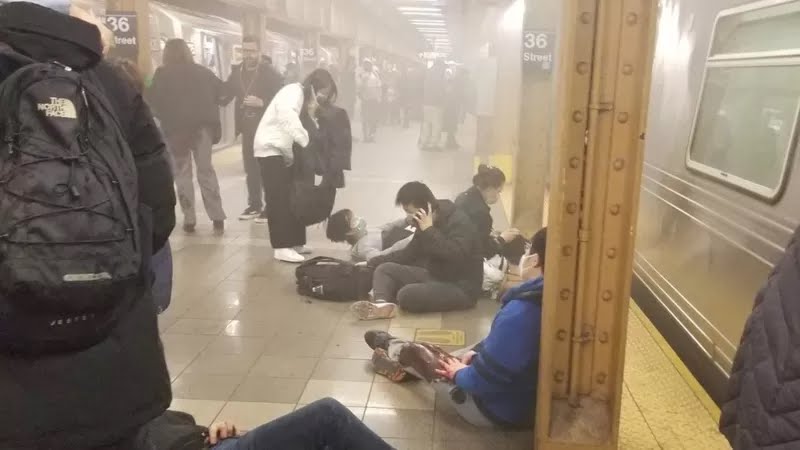 BROOKLYN SUBWAY SHOOTING – A chaotic scene unfolded inside a subway station Tuesday morning when a gunman donned a gas mask, detonated a gas canister, and opened fire on commuters.

At least 10 people were shot and 6 others were injured, officials said. Five victims are in critical condition but are expected to survive. The shooter remains at large.

iexclusivenews reports that according to WNBC, ‘more unexploded smoke canisters were found on the train where the gunfire erupted, as were gasoline cans, further evidence supporting law enforcement officials’ preliminary view that the shooting was a premeditated attack.’

Multiple people were shot during a subway shooting in Brooklyn on Tuesday morning. Cell phone video shows commuters running off the platform while smoke is seen. pic.twitter.com/O0aO8lOEPW

A motive for the attack is not known. Although, NYPD Commissioner Keechant Sewell said at a news conference there was no apparent link to terrorism.

The suspected gunman is described as a Black male, 5’5” with a heavy build, and wearing a green construction vest and grey sweatshirt. It was later reported that police were looking for a U-Haul van with Arizona license plates AL31408 that may be linked to the attack.

ABC News reported the suspect ‘was seen mumbling to himself before he put on the gas mask, released a smoke canister commonly bought online and opened fire with .380 caliber handgun.’

“We’re praying for all New Yorkers who were injured or affected by today’s attack,” said NYC Mayor Eric Adams. “So far, we know that we have a multiple number of injuries, including victims of gunshot wounds…We will not allow New Yorkers to be terrorized even by a single individual. The NYPD is searching for the suspect at large, and we will find him.”

The incident happened on a Manhattan-bound N subway car near the 36th Street subway station in Sunset Park, Brooklyn.