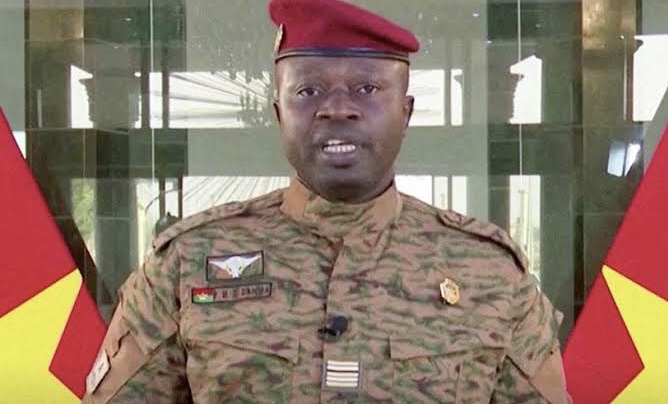 Burkina Faso Army Captain Ibrahim Traore has announced the ousting of military leader Paul-Henri Damiba, dissolution of the government and suspension of the constitution and transitional charter.

iexclusivenews reports that captain Traore announced the coup on national television Friday evening. Saying a group of officers decided to remove Mr Damiba over his inability to deal with a worsening Islamist insurgency.

This online news outlet understands that captain Traore announced that the country’s borders were now closed indefinitely and that all political and civil society activities were suspended. More than 40 per cent of Burkina Faso is outside government control.

Friday morning, multiple reports noted soldiers on the streets and heavy gunfire near the main military camp. And residential areas of Burkina Faso’s capital. Explosions were also heard near the presidential palace.

iexclusivenews reports that this is the second coup seen by the African country since January. January 22, police in the capital Ouagadougou clashed with protesters at a banned protest over the government’s handling of its insecurity concerns which it has battled since 2015.

President Roch Marc Christian Kabore was arrested by soldiers after gunshots were heard near his private residence on January 24.

On February 16 and in March, the military junta signed a charter establishing a three-year transition period before the country would hold its elections.

Defending his January coup as “an issue of survival for our nation,” even if it was ”perhaps reprehensible” to the international community.