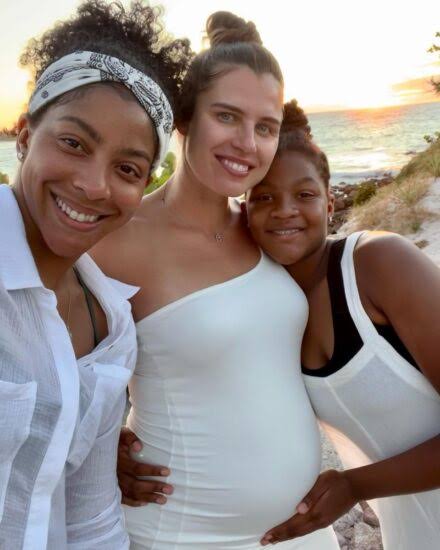 Candace Parker announced via Instagram that she is expecting a baby with her wife of two years, Anna,

Candace Parker shared via instagram that she and her wife, Anna (center) are expecting a baby in the new year.

It’s hard to imagine how Candace Parker could top winning a WNBA championship in her hometown, but Tuesday afternoon she did.

Candace Parker announced via Instagram that she and her wife of two years, Anna Petrakova, are expecting a baby.

Candace Parker wrote in her post. “It’s surreal that we now have a baby on the way! Lailaa is pumped to be a big sister.”

Candace Parker, who will return to the Sky for the second of her two-year contract in 2022, has been candid about her desire to have more children over the last year.

She gave birth to her daughter, Lailaa, a year after being drafted by the Los Angeles Sparks with the first overall pick in the 2008 WNBA Draft.

Parker has shared every moment of her career with her now 12-year-old daughter since.

Parker returned to the WNBA six weeks after Lailaa’s birth in May and that following January traveled to Russia for her overseas commitments.

Her mother, Sara, traveled with her and was at every game with Lailaa. Parker would nurse her daughter at halftime.

Sara said in a past interview with the Sun-Times her daughter has played some of her best games on little to no sleep.

When Parker won her second WNBA title in October, Lailaa was present for every game and celebratory moment.

After beating the Phoenix Mercury in Game 4, 80-74, Parker thanked Lailaa in her championship post-game press conference.

“I have a picture of Lailaa in Minnesota [when we won the championship in 2016],” Parker said.

“She’s yelling ‘Mom, we did it!’ I have that picture on my wall in the office. Before I decided to come here, I asked her if it was ok if I came to Chicago. She said, ‘I want another picture like that.’ It’s crazy because she came out to the court again and said ‘We did it.’”

“I owe everything I am to her.”

Parker and Petrakova played together for UMMC Ekaterinburg, the team that Parker’s Sky teammates Courtney Vandersloot and Allie Quigley currently play for.

Petrakova played for the Russian national team during the 2012 Olympics.

Parker’s post, which celebrated the couple’s two-year wedding anniversary, didn’t share a due date for their new baby.

She did thank her wife for loving Lailaa as her own and being a constant source of support.

“I can’t wait to embark on this next chapter in life with you,” Parker said.