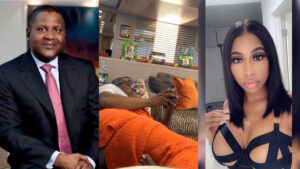 iexclusive News Nigeria reports that Aliko Dangote has opened up on how his ex mistress tried to extort $5 million from him.

This online news medium gathered that Premium Times in a report identified the lady as Autumn Spikes in court papers filed at a Miami-Dade County Court in Florida, United States of America.

Dangote who filed the suit with a pseudonym, John Doe, is demanding an “excess of $30,000” in damages against Ms Spikes.

Explaining why he filed the case with a pseudonym, he said:

”to avoid unnecessary media attention and avert coercion to pay the money demanded by Ms Spikes”.

“The plaintiff, John Doe, also known as AD, is a foreigner and for the purpose of this action employs the pseudonym John Doe in order to avoid unnecessary publicity designed to impair his right to privacy and to coerce his payment of money he does not owe Autumn Spikes,” the document read in part.

While accusing Ms Spikes of libel, defamation, cyberstalking and a breach of agreement ”to keep their relationship private and off the social media” he alleged:

“Autumn Spikes has made a demand that the plaintiff pays her five million dollars ($5,000,000.00) as shown in Exhibit 1,” Dangote is reported to have deposed in the court documents.

The demand for the $5 million was made in communication between Dangote’s lawyer Mr. Fleisher and Ms. Spikes’ lawyer Paul Petruzzi.

She had through her lawyer sought $5 million to quietly severe what she described as “an ongoing intimate relationship for nearly the entire past decade since she was pretty young”.

In asking Dangote to pay the $5 million as demanded by his client, he said that the relationship was smooth going until “For whatever reason, your client broke off the relationship as soon as one of his other ‘conquests’ broke her silence.

“Your client now wants my client to sign an NDA and, through his representatives, offered her money to do so.

“While I appreciate your client’s desire to continue to exercise his control over mine, she will only agree to the NDA proposed by your client in exchange for the lump sum of 5 million dollars.”

Dangote has rebuffed the demand saying that,

“John Doe’s generosity toward Autumn Spikes, if any, has been breached by Autumn Spikes’ exposure and solicitations to talk show media if he fails to pay her meritless demands.”