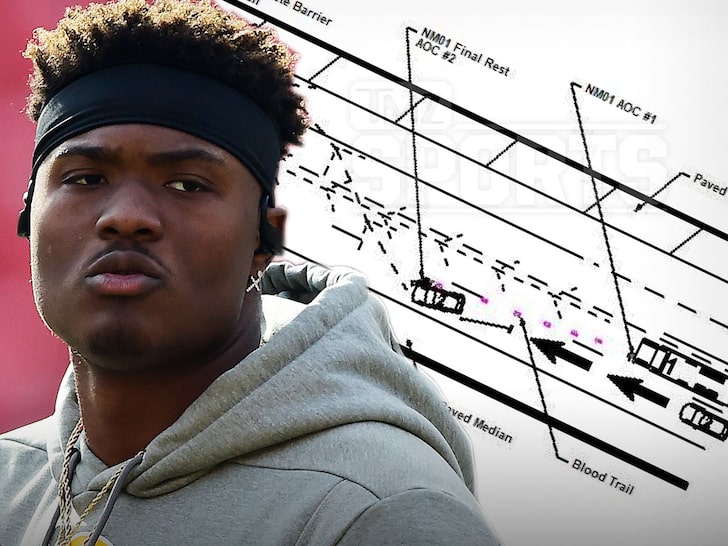 Dwayne Haskins‘ body was hit by two vehicles in the accident that took his life earlier this month, according to a crash report, obtained by TMZ Sports.

In the Florida Highway Patrol documents, investigators say after Haskins was struck by a dump truck in the middle of a Broward County highway in the early morning hours of April 9 — a Subaru Outback also “partially” hit Haskins’ body.

Officials released a diagram of the crash — showing what they believe were the two points in which the vehicles struck the Pittsburgh Steelers quarterback (labeled as NM01 in the image).

In the docs, investigators say a witness told them a third vehicle may have been involved as well.

Officials say Haskins succumbed to his injuries on the scene and was pronounced dead just minutes after being struck.

Investigators say both drivers came to a stop shortly after hitting the football player. They also noted in the docs neither driver was tested for alcohol nor drugs.

Officials in the documents did not reveal why they believed Haskins was walking along the busy highway before being hit — a final Traffic Homicide Investigation is still pending.

As we reported, Kalabrya Haskins said in a 911 call that Dwayne had said he was on foot in search of gas after his car had stranded him.

She said in the frantic call, “I just want somebody to go in the area and see if his car is there and if he’s OK and if anything happened to him.” Dwayne was just 24 years old.

Related Topics:Dwayne Haskins
Up Next

Why Osinachi’s Husband Has Not Been Arraigned – IGP