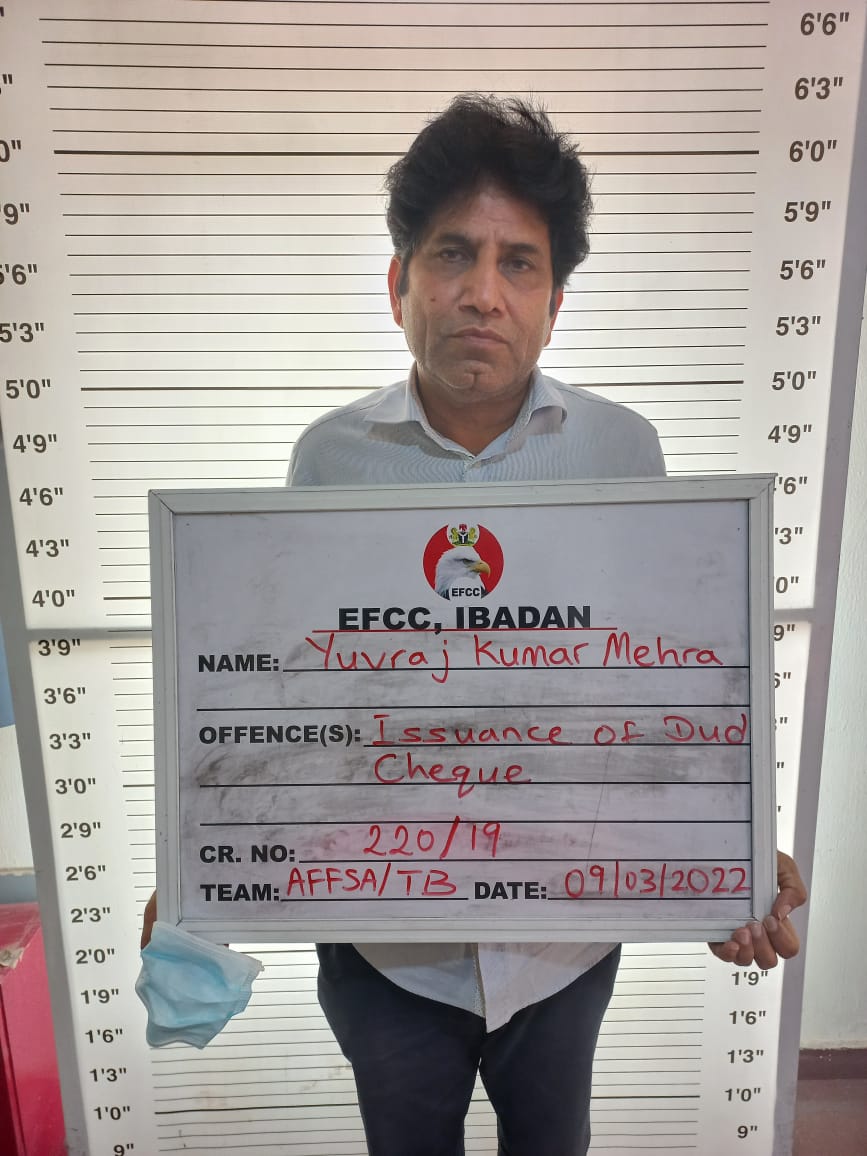 An Indian national, Yuvraj Kumar Mehra was recently arraigned by the Ibadan Zonal Command of the Economic and Financial Crimes Commission, EFCC, before Justice Olanrawaju Majekobe of the Ogun State High Court on eight count charges which bordered on conspiracy and issuance of dud cheque to tune of N70million (Seventy Million Naira).

The defendant was arraigned alongside his firm, Dolphin Steels Nigeria Limited.

Yuvraj was docked for his refusal to pay the Ibadan Electricity Distribution Company Plc, IBEDC the said sum for power supplied to his company.

Investigation carried out by the operatives of the Ibadan Command revealed that the defendant issued a total number of thirteen dud cheques for N125, 000, 000.00 (One Hundred and Twenty Five Million Naira) to IBEDC, between October 2, 2018 and December 3, 2018.

Upon persistent effort by IBEDC, the defendant made part payment but reneged in paying the balance of N70million and all attempt to get him to pay were futile.

One of the counts reads: “That you Yuvraj Kumar Mehra, Dolphin Steels Nigeria Limited, Mohit Gupta (at large) and Sushil Kumar (at large), on or about the 5th of December, 2018 at Sango Ota within the Jurisdiction of this Honourable Court conspired to commit an illegal act to wit: issuance of Dishonoured Cheque, an offence contrary to Section 516 of the Criminal Code, Cap 30 Laws of Ogun State.”

Another count reads: “That you Yuvraj Kumar Mehra, Dolphin Steels Nigeria Limited, Mohit Gupta (at large) and Sushil Kumar (at large), on or about the 5th of December, 2018 at Sango Ota within the Jurisdiction of this Honourable Court knowingly and fraudulently issued Zenith Bank Plc Cheque No. 2493, dated 30th of November, 2018 in the sum of (10, 000, 000.00) Ten Million Naira only, made payable to Ibadan Electricity Distribution Company, which when presented for payment was dishonoured on the grounds that no funds or insufficient funds were standing to the credit of the account on which the cheque was draw.”

The defendant pleaded “not guilty” to the charges preferred against him by the EFCC.

Upon his plea, the prosecution counsel, Sanusi Galadanchi asked the court for a trial date and the remand of the defendant pending the determination of the case.

Counsel to the defendant, Clifford Anuge prayed the court to admit his client to bail as he informed that the bail application had been filed and served on the prosecution and the court.

Justice Majekobe, after listening to both parties, granted Yuvraj bail in the sum of N4.1million and two sureties in the sum of N2, 050, 000 (Two Million, Fifty Thousand Naira) each.

She further ordered that sureties must provide the court with their “affidavits of means, passport photographs and one of the sureties must be a resident of Ogun State with landed property”.

Furthermore, the defendant must deposit his international passport with the court registrar.

The matter was adjourned till May 18, 2022 for commencement of trial.

In another development, the EFCC on March 23, 2022, secured the conviction and sentencing of one Osinuga Oluwa Adeyemi and Musa Lanre Dauda before Justices Uche Agomoh of the Federal High Court and Sherifat Adeyemi of the State Hihg Court, both sitting in Ibadan, Oyo State, on separate one count charge each which bordered on cybercrime.

The convicts pleaded “guilty” to the charges preferred against them.

Also, the convicts were ordered to restitute their victims as well as forfeit all items recovered from them by the EFCC.

Crypto.com To Air Campaign In Support Of Ukraine During Academy Awards