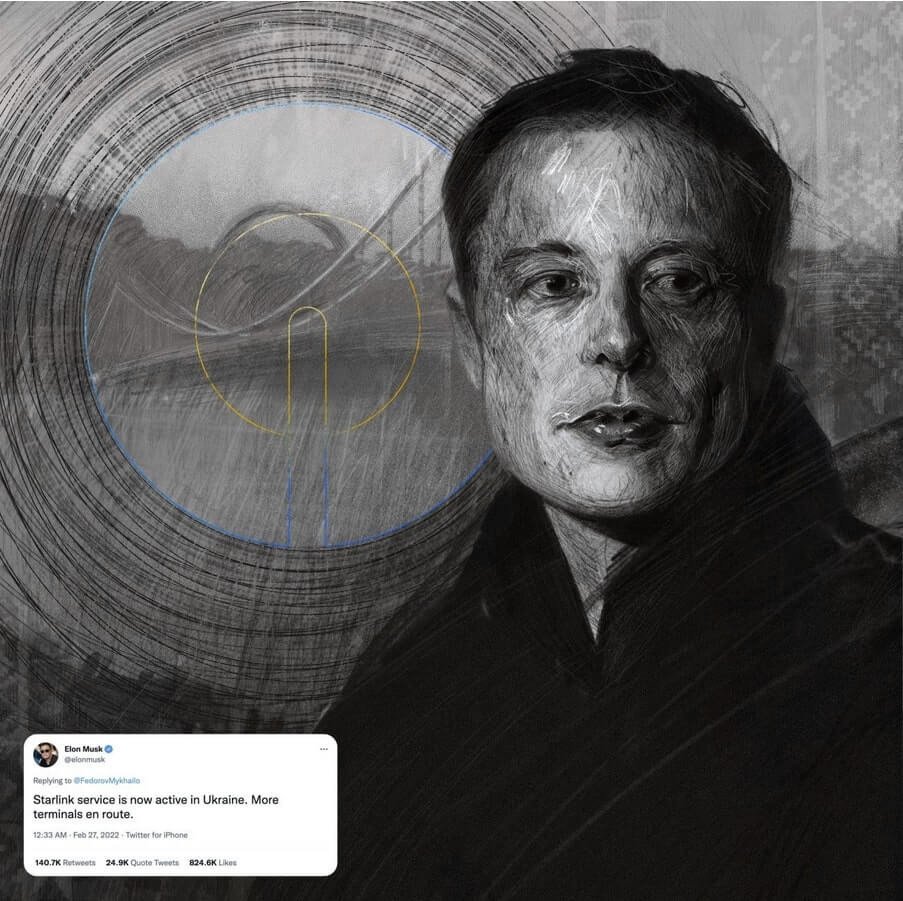 Elon Musk NFT is the first to be inducted into the Hall of Fame of the Ukrainian NFT Museum MetaHistory, but he will not be the last.

The Hall – MetaHistory’s Hall of Fame

Since the start of the war in Ukraine many businesspeople, artists, and politicians have shown their support for the country, but some of them stood out especially. MetaHistory, Ukraine’s NFT museum, now wants to commemorate those individuals on the blockchain.

The team of MetaHistory released the 1st part of its collection of artworks on March 30 to great success, collecting $800k from the sales – 100% of which goes as a donation to the Ministry of Digital Transformation of Ukraine, the project’s official supporter.

This week, they’re launching The Hall of Fame, a special selection of NFT portraits of people that have helped Ukraine in its time of need. These people provided goods and services that supported Ukraine behind closed doors and used the power of their art to draw attention to the cause and collect donations.

These artworks aren’t for sale, they are an expression of gratitude – similar to how paintings were presented to royal families and famous scientists in the past. A difference is that NFT-based artworks will stay on the blockchain forever. Ukraine’s supporters are quite literally writing history through their deeds.

Who are those people? MetaHistory’s team picked them based on how vocal they were in supporting Ukraine, and what real action they have taken. You all know their names – have a look at the Hall of Fame itself https://metahistory.gallery/hall. A little hint: actions like this can earn you a place in MetaHistory’s Hall of Fame:

This exchange was born when Ukraine’s Digital Minister Mr. Fedorov posted one of the tweets that later made him famous at home. Tweets that spark action, show decisiveness and courage. This particular tweet built a robust Internet connection via Starlink.

Elon Musk is the first inductee into the Hall, but not the last. Some other inductees include: Mila Kunis, Elton John, Jared Leto, Jim Carrey, and Benedict Cumberbatch – their portraits are ready to be presented in the Hall of Fame.

“MetaHistory is a project put superbly together under conditions where most can’t think about more than immediate survival and concern for loved ones. How do you focus on quality when you hear the sound of bombs outside? MetaHistory launched a use case for blockchain utility simultaneously while preserving the heritage and future of Ukraine. I am humbled and happy to be its ambassador,” commented Vesa, crypto artist.

“It was a huge privilege for me to represent Ukraine DAO at the panel discussion organized by MetaHistory last week alongside Alex Bornyakov, Dima Buterin, and Brittany Kaiser. I’m excited about the Hall of Fame and so proud to see all this support for Ukraine from the world’s business people and artists,” commented Alona Shevchenko, co-founder of Ukraine DAO.

The Hall is going to be released in conjunction with the 2nd part of the museum’s collection, the so-called 2nd drop. Famous artists like Waone Manzhos, Sestry Feldman, Danya Shulipa, Irene Neyman, and more have created true masterpieces to commemorate the events of the war between March 2nd and March 14th.

This part of the collection, unlike the Hall, is available for purchase – you can mint an NFT for 0.15 ETH. If you want to participate in the community & donate to Ukraine – while getting a beautiful artwork in return, have a look at their website https://metahistory.gallery/ this Sunday, May 1st, at 23:59 GMT+3.