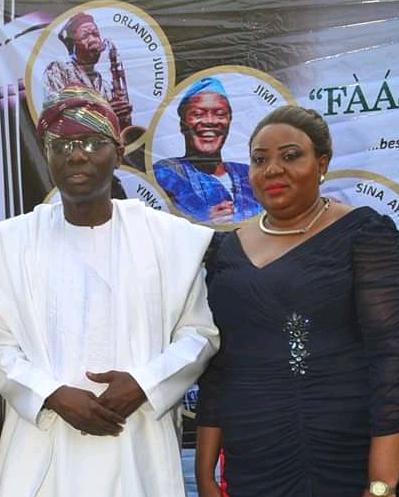 Bimbo Esho, the managing director of Evergreen Musical Company, Africa’s largest collectors and promoters of music of yesteryears, has applauded Governor Babajide Sanwo-Olu of Lagos State for his giant strides in the diligent management of a life-threatening disease like Covid 19.

According to her, Governor Sanwo-Olu’s exemplary leadership should be emulated by all as only a man who loves his people will give his all to save them. She reiterated further that health workers and state government officials who have given their all in ensuring the safety of lives of all Lagos inhabitants ought to be celebrated for their unrelenting efforts in ensuring the present scourge reached its plateau.

Bimbo said she has watched closely in the past five months how Governor Sanwo-Olu  has remained unrelenting in his fight against this killer disease. She said even though the outbreak affected the entertainment industry and made it suffer some setbacks, she is very optimistic that life will return to what she called the ‘new normal’ and many will be relieved of the present emotional stress and stigmatization, which this sudden epidemic has caused.

In her final remarks, she said “even though times are hard, we are very optimistic that Lagos State will continue to remain the epicenter of entertainment in Nigeria but i would like to implore those in the entertainment industry to continue to cooperate with the Lagos State government and adhere to all the safety measures and guidelines that are in place and remind all that life has always returned to normal after all threatening pandemic outbreaks in the book of history and Covid-19 will not be an exemption.”