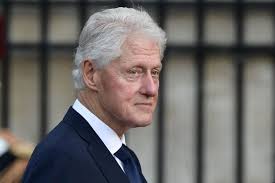 Bill Clinton, the former president of the United States, is improving after two days of treatment in a California hospital for an infection, according to his physicians.

iexclusive News Nigeria reports that Clinton spokesperson Angel Urena claimed on Twitter that the 75-year-old was admitted to the University of California Irvine Medical Center on Tuesday evening “for a non-COVID-19 infection.”

Urena stated, “He is on the mend, in good spirits, and immensely grateful to the physicians, nurses, and personnel who have provided him with superb care.” “He’s up and about, joking and charming the hospital staff,” the spokesman told Reuters.

Clinton went to the hospital after feeling tired and was diagnosed with a bloodstream infection that doctors believe began as a urinary tract infection, according to CNN, citing his doctors.

Alpesh Amin and Lisa Bardack, the former president’s doctors, said he was “brought to the hospital for intensive monitoring and IV antibiotics and hydration.”

“He is still being monitored at the hospital,” they added in a statement. “His white blood cell count is moving down after two days of treatment, and he is responding well to medications.”

They added: “We hope to have him go home soon.”

Surulere PDP in Disarray As Youths Call For Quick Action