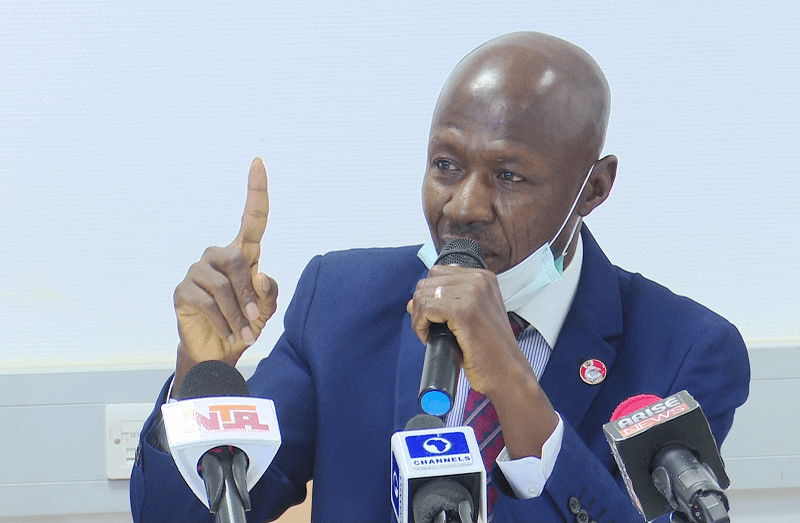 A businessman has played a tape recording before the Justice Ayo Salami-led presidential probe panel on how some operatives of Economic and Financial Crimes Commission (EFCC), popularly known as ‘Magu boys’ used a lawyer to demand bribery of N75 million to be paid into different accounts.

The businessman, Mr. Donald Wokoma of Damijay Integrated Services Limited, had tendered an affidavit of fact in support of a petition he wrote against ‘Magu boys’ for extortion before unfreezing his account.

The EFCC had in 2018 refused to obey the order of Justice O.C. Agbaza to lift the restrictions on the account of Damijay Services Limited, after the firm had filed a suit for fundamental rights enforcement at the FCT High Court.

An Abuja-based lawyer who was allegedly involved in the deal, the Economic Confidential gathered, did not deny his voice in the 27 minutes tape recording that was played before the panel where he mentioned names of suspended Chairman of EFCC, Ibrahim Magu, among other operatives over the bribery allegation.

The lawyer (name withheld) was the former lawyer to the company on the case with the EFCC.

Meanwhile, in the affidavit sighted by the Economic Confidential, the businessman alleged that on or around 20th of May, 2020 the said barrister asked him to sign three blank cheques (valued at 25 million Naira each), which he would hand over to the people in EFCC to enable them unfreeze the account.

When the cheques were not honoured by the bank, the ‘Magu boys’ requested that the businessman should execute an Irrevocable Standing Payment Order (on the company’s official letterhead) in favour of the three bank accounts and later demanded for 40% of the money in the company’s account (which aggregates to One Hundred Million Naira) which the businessman outrightly rejected.

After rejecting their last demand, the businessman said that: “On the 9th of July, 2020, Mr. Mohammed Goje of EFCC called me to come to their office the next day being 10th July, 2020 (Friday). I honoured the invitation and stayed for long hours only for me to be informed by him (around 5: 09pm after I had left) that I have been charged to Court by sms and that I was to appear before the F.C.T. High Court sitting at Lugbe by 8:30 am on Monday, 13th July, 2020 to be with a copy of the charge and arraigned simultaneously.

“He warned me via the sms to ‘endeavour to come to avoid unnecessary embarrassment.’ On the 13th of July, 2020 while at the Lugbe High Court, I was served with an Amended Charge dated and filed on the 19th day of June, 2020 (exactly 2 days after I outrightly rejected their fresh demand of 40% of the total sum of the money in the company’s account).

It went on to add that: “After presenting the petition to the Honourable Attorney-General of the Federation and specifically on Monday, the 6th day of August, 2020, I called Barrister VICTOR GIWA and informed him that a copy of the correspondences he has been exchanging with the operatives of the EFCC would be needed at the office of the Honourable Attorney-General of the Federation in support of the petition.

“In response to my request as per the preceding paragraph, Barrister VICTOR GIWA told me over the phone that he has been receiving calls from agents of the EFCC and that in particular one AISHA of the EFCC was crying and pleading with him not to expose them else her career would be ruined.

“He (Barrister VICTOR GIWA) further said that some other EFCC officials, which he has been corresponding with, called him to query him on why he allowed me to write the petition to the Honourable Attorney-General of the Federation and demanded that the said petition (Exhibit Dami 1) be withdrawn else there would be consequences after the storm currently buffeting the Commission.

“Barrister VICTOR GIWA further told me that those EFCC officials reminded him that he is a young Lawyer and that he has a lot before him and that he should not forget that what is happening at the EFCC at the time was a tussle between the Honourable AGF and the suspended Acting Chairman of the EFCC and boasted that things would soon return to normal at the EFCC. They thereafter asked him to call me so we could have a meeting where the matter would be effectively resolved.