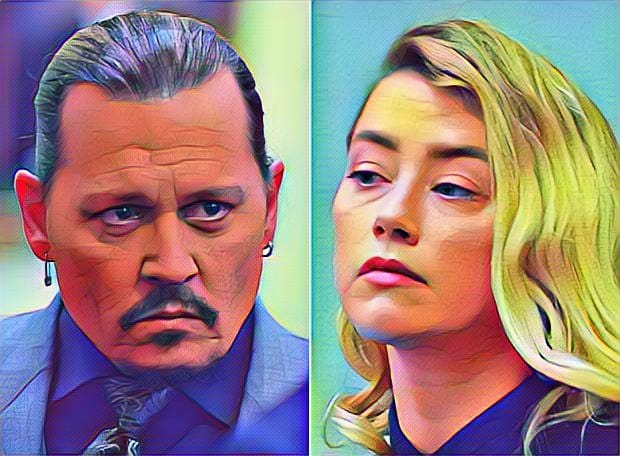 iexclusivenews reports that Ms. Heard took the stand Monday for the third day of testimony as the trial resumed after a week-long hiatus.

Amber Heard told the court that dealing with ‘various versions’ of Johnny Depp was a ‘juggling act,’ and that she was unsure which version she would get.

‘Then I get different versions of him,’ Ms. Heard says in the audio heard in court.

Each time, I get the insecure or fearful version of him pursuing a different medium.

“So if it’s Adderall or Junkie Johnny, then he’s violent and he’s a bully and he’s mean.”

Johnny Depp was spotted smiling and laughing with his shoulders heaving in amusement when ‘Junkie Johnny‘ was spoken.

In the audio, Ms. Heard claims that this version of her ex-husband will cause “violence or anger.”

Amber Heard told the court the recording depicted her trying to explain to Depp. The ‘futility’ of trying ‘to negotiate with him. And the substances he was taking at the time’.

“And I was constantly doing a juggling act with the kind of versions of Johnny that I was dealing with.”

What You Need To Know About The Trial

Johnny Depp is suing his ex-wife for defamation over a 2018 op-ed she wrote for The Washington Post where she describes herself as a “public figure representing domestic violence”.

The Pirates of the Caribbean actor is not named in the article.

Which is titled “I spoke out against sexual violence – and faced the wrath of our culture. This must change”.

However, iexclusivenews Nigeria reports that Johnny Depp claims this falsely implies he is a domestic abuser. Which he strongly denies. And has left him struggling to land roles in Hollywood. He’s suing for $50 million.

Amber Heard is fighting back for $100million. Accusing Mr. Depp of orchestrating a ‘smear campaign’ against her. And describing her lawsuit as a continuation of ‘abuse and harassment.

The trial in Fairfax, Virginia, began on April 11 with stunning testimony within the courtroom.