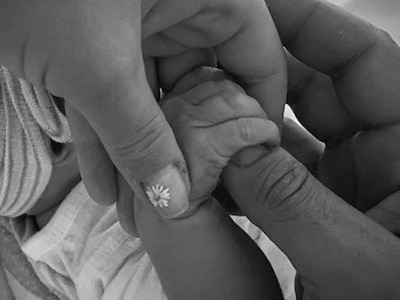 Cue the fireworks because Katy Perry has officially given birth to a baby girl.

The “Smile” singer and her fiancé, Pirates of the Caribbean actor Orlando Bloom, have welcomed their first child together, a daughter named Daisy Dove Bloom. The couple’s daughter arrived into the world on Wednesday, Aug. 26, turning Perry into a first-time mom and making 9-year-old Flynn, Bloom’s only child with ex-wife Miranda Kerr, an older brother to his first sister. Perry and Bloom announced their baby’s arrival via UNICEF, the organization they serve as Goodwill Ambassadors for.

“We are floating with love and wonder from the safe and healthy arrival of our daughter,” the superstar parents said in a statement.

“But we know we’re the lucky ones and not everyone can have a birthing experience as peaceful as ours was,” they shared. “Communities around the world are still experiencing a shortage of healthcare workers and every eleven seconds a pregnant woman or newborn dies, mostly from preventable causes. Since COVID-19, many more newborn lives are at risk because of a greater lack of access to water, soap, vaccines and medicines that prevent diseases. As parents to a newborn, this breaks our hearts, as we empathize with struggling parents now more than ever.”

In “celebration of the heart we know our daughter already has,” Katy and Orlando established a UNICEF donation page on baby Daisy’s—or “DDB” as they called her—behalf.

The famous parents, who got engaged in Feb. 2019 after a years-long on-and-off romance, announced their baby news in early March when the performer cradled her bump in the music video for “Never Worn White.” The following month, she revealed they had a little girl on the way.

In June, the singer explained why they were waiting to officially decide on a moniker for their firstborn.

“We have yet to decide specifically on her name because, I think, we’ve got options and she’ll tell us,” the star said in an interview on Mix 104.1’s Karson & Kennedy. “I’ll look at her and go, ‘Oh yeah, yeah, you are her. You are that.'”