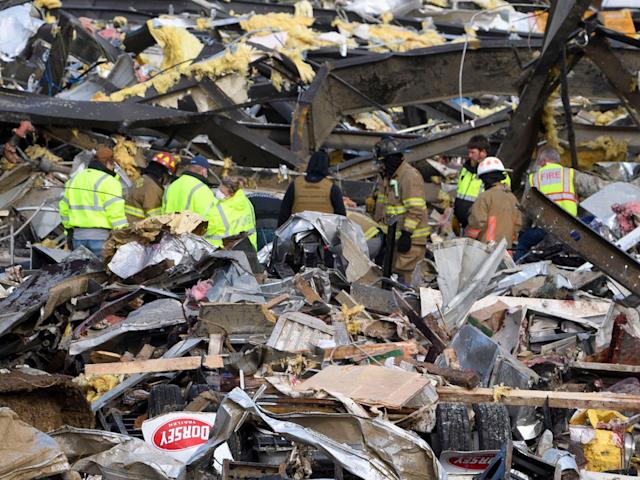 Kentucky Tornadoes – At least 90 people are likely dead across five states after tornadoes tore through the US, affecting residents in at least six states. More than a hundred people are feared to have lost their lives in Kentucky alone.

Officials have said that there are “confirmed fatalities” after workers became trapped when a roof collapsed at an Amazon warehouse in Illinois.

Hundreds are feared to be dead across the midwest and the southern US following a string of strong nocturnal tornadoes overnight between Friday and Saturday.

The governor of Kentucky, Democrat Andy Beshear, said “more than 80” people had been killed in the path of a tornado stretching at least 200 miles.

People embrace as tornado damage is seen after extreme weather hit the region December 12, 2021, in Mayfield, Kentucky(AFP via Getty Images)

“It has been one of the toughest nights in Kentucky history,” the governor said on Saturday. “Some areas have been hit in ways that are hard to put into words.”

An aerial photo made with a drone shows widespread destruction of homes and businesses after tornadoes moved through the area leaving destruction and death across six states, in Mayfield, Kentucky, USA, 12 December 2021(EPA)

The estimated number of deaths suggests that the storm that hit the state on Friday night could be the deadliest storm since 1890 when 76 people were killed in the area around Louisville.

Weather experts say the tornado may have touched down for as far as 250 miles, possibly making it the longest twister on record.