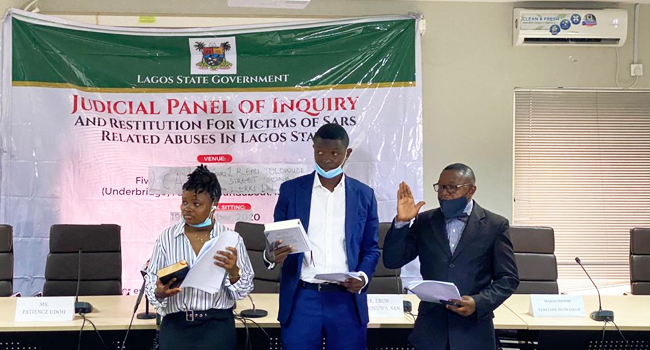 Lagos Governor has Sworn-In Rinu and Majekodunmi As Youth Reps Into Judicial Panel.

iexclusive News Nigeria reports that the Lagos State Government on Tuesday sworn-in Rinu Odulala and Temitope Majekodunmi as representatives of youths on the judicial panel of inquiry and restitution of the now-disbanded Special Anti-Robbery Squad, SARS.

They were sworn-in as members of the judicial panel of inquiry set up to get justice and compensation for victims of Police brutality.

Oduala is the convener of Operation Sanitise and a leading advocate for #ENDSARS.

Governor Sanwo-Olu while announcing their nomination by the youths wrote, “Well done to the youths in Lagos for coming together to select Rinu Oduala and Majekodunmi Temitope to join the Lagos Judicial Panel On SARS as part of our commitment to justice and compensation for victims of Police brutality.