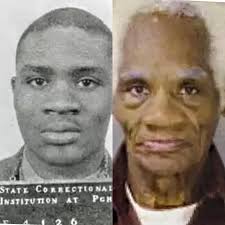 It was February 20, 1953, when Joseph Ligon, then 15 years, attended a dance and drank wine with four other teens. They then ended up robbing and stabbing eight people in Philadelphia. Two of the victims, Charles Pitts and Jackson Hamm, died.

Ligon was convicted and sentenced to life in prison in 1953, at 16 years old, alongside three other boys in connection with the stabbing deaths of the two men and the injury of the eight others. Ligon, despite his conviction, maintains that he did not kill anyone as he stabbed only one person, who survived.

At 83, Ligon is now said to be the oldest and longest-serving juvenile lifer in the world, having served 68 years in prison. His co-defendants have either died or received commutations but when he got the chance to be released, the white-haired man turned it down.

In November 2016, he became eligible for a new sentence following a Supreme Court decision banning life without parole for juveniles. However, when the offer of 50 years to life in prison that would make him immediately eligible for parole was put to him, he declined on principle.

“His view is: He’s been in long enough,” Bradley Bridge, an attorney with the Defender Association who represents Ligon, told the court at the time. “He doesn’t want to be on probation or parole. He just wants to be released.”

Ligon, of course, would like to go free, but he apparently didn’t want the kind of freedom that would require him to remain under the control of the Pennsylvania Department of Corrections.

That same Pennsylvania, he claims, has not done anything good for his family after it locked him up.

Besides, Ligon said he would like to join his sister and niece in New Jersey, but parole would require him to stay in Pennsylvania, which he is against.

Ligon, who remains mostly illiterate, grew up on a farm in Alabama. He never attended school until he was 13 when his family moved to Philadelphia. It was in Philadelphia that he joined the gang who got involved in the drunken stabbing spree. Identified by his accomplices as the killer, Ligon said he was told to plead guilty and he didn’t know that would mean life in prison. He was also not present at his own sentencing.

In May 2017, Ligon was re-sentenced to 35 years to life but rejected his new sentence for the second time. “He does not want the sentence the judge gave him,” Bridge was quoted by CBS Philly. “He figures that after