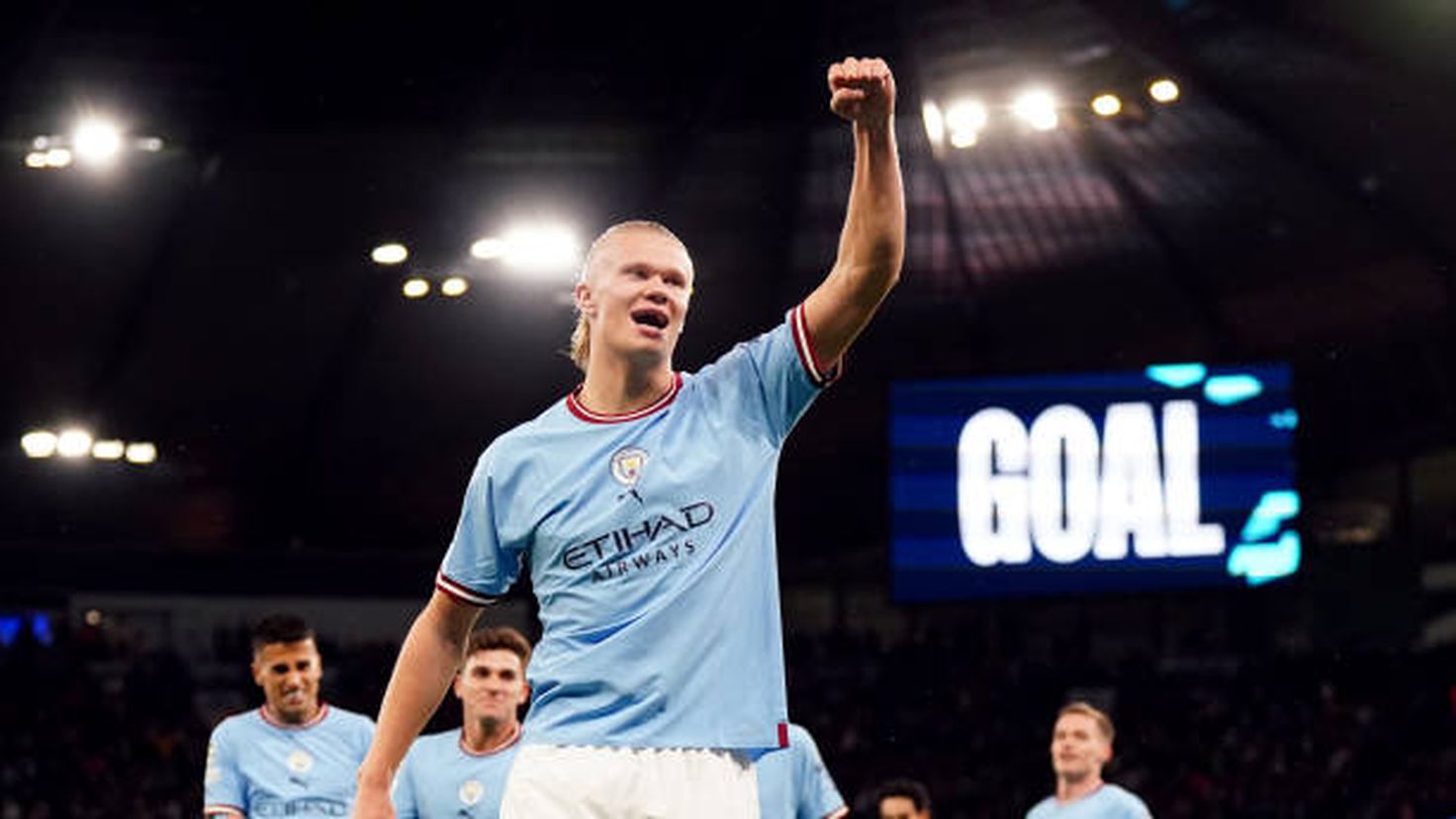 Haaland grabbed two goals in the first half as City cruised to their third win in three in Champions League Group G.

Peeeep peeep peeeeep! Donatas Rumsas doesn’t add any time on, and that’s that at the Etihad. Manchester City have utterly breezed past Copenhagen, and Erling Haaland has taken his goal tally for the club to 19 in 12. Decent.

City now have nine points from nine in Group G – and Borussia Dortmund’s win in Seville means Pep Guardiola’s men are now eight points clear of third. They can wrap up their last-16 place when they visit Copenhagen next week.

Trailing Dortmund by five points, the Danes look to be in a straight fight with Sevilla for the group’s Europa League spot.

Released by Gómez’s angled ball, Wilson-Esbrand bursts forward into space to cross from the left. He fizzes in a low ball towards the penalty spot, where Palmer can’t quite connect. Copenhagen get it behind for a corner, which City work to Gómez on the edge of the box. He shoots powerfully towards the top corner, but Grabara does well to parry!

Mukairu thunders down the right at pace, beating one, and then another. In space to cross, he lays it back to the top of the box…. where Palmer has tracked back to reclaim possession.

Grealish is so close to getting a sixth! From the right, Mahrez lifts a ball onto the boot of the England international, who’s lurking with goalscoring intent at the top of the D. He sidefoots his volley towards Grabara’s left-hand corner, but the ball flies just, just wide!

It’s now 4-1 to Dortmund in Seville. Julian Brandt scored for the Germans a few minutes ago.

Having given up Copenhagen’s clearest chances of the night, City now plunder a fifth. Grealish bursts forward into the visitors’ half, before slipping the ball right to Mahrez. He advances into the box and cuts it back for Álvarez, who has the simple task of tapping in from five yards out.

Twice Copenhagen go as close as they have done all night. First, Haraldsson drives forward towards the City area, before slipping it left to Mukairu. He has peeled off into space to shoot, but can’t beat Ederson; his strike is deflected off target for a corner.

From the corner, Lund Jensen gets a firm header to the delivery and sends it downward, but also sends it wide.

Sevilla pulled one back against Dortmund early in the second half, by the way; Youssef En-Nesyri got the goal for the Andalusians. No more goals since then in Seville, so the visitors are still heading for victory.

Grealish plays a little reverse ball into the path of Álvarez, who’s arriving to his left at pace. The Argentine takes a touch and advances into the Copenhagen box, but has to take his shoot from quite an acute angle. He pings his effort back off the post, and Copenhagen escape conceding a fifth – for now, at least.

City are stroking it about like a keep-ball drill in a training session. We don’t really need these last 20 minutes, to be honest.

City also shuffle their pack, replacing Silva with another youngster. Josh Wilson-Esbrand is on for his first appearance in the Champions League.

Grealish is brought down outside the Copenhagen box by Lerager, and City have an enticing free-kick chance. Gündogan also stands over it, but it’s Mahrez who strikes – and strikes into the wall.

The Copenhagen fans are making some impressive noise in the away end.

That really is some stat.

Manchester City replace Cancelo with Rico Henry Lewis. He’s had some Premier League game time already, but this is his first Champions League appearance for the club.

Mahrez takes the penalty, and Mahrez scores it. He sends Grabara the wrong way.

When Cancelo delivers the ball into the box from the right, Stamenic pretty much rugby tackles Laporte at the back post. Donatas Rumsas has no hesitation in awarding a spot-kick.

Palmer carries the ball forward and lets fly from range, but Grabara saves well to deny the 20-year-old. His shot was heading into the top corner.

At the other end, Ederson gets what must surely be his first action of the night. From the right wing, Johannesson pings over a dangerous low cross that Kristiansen gets something on, but Cancelo does enough to get in the way. The ball bounces through to the City goalkeeper.

Grealish knocks it back to Gündogan, who’s five yards outside the box in the left-hand channel. He opens up his body and looks to curl a shot past Grabara and into the far corner, but his strike is too close to the goalkeeper.

Peeeep! Back underway in Manchester.

The teams are back out at the Etihad, and there’s a half-time change for both teams. Haaland will have to satisfy himself with two goals, as he’s been replaced by City youngster Cole Palmer.

Dortmund in charge at the Pizjuán

In Seville, Dortmund are 3-0 ahead at half time. Jude Bellingham and Karim Adeyemi added two more just before the break to put the Germans all but out of sight.

Haaland (third left) steers the ball home from close range for his second goal of the night.

Peeep peeep peeeep! No time added on at the end of the first half. It’s been one-way traffic. City could very easily have had four or five.

That’s the best moment the visitors have created. Damary thumps a high, curling ball from the left over to the back post. Gómez doesn’t deal with it, and for a second Karamoko has the chance to get on the end of it. He hesitates, though, and the ball flies out for a goal-kick.

City pop it about for a good 90 seconds or so in the Copenhagen half, before Grealish finds space to advance towards the box on the left. He lays it back to Gómez to shoot – and his low effort hits off one man in the box, before deflecting off another – Khocholava – and into the net. City utterly cruising.

Copenhagen keep it for a bit, but there’s never even a suggestion that they might get anywhere near Ederson’s goal.