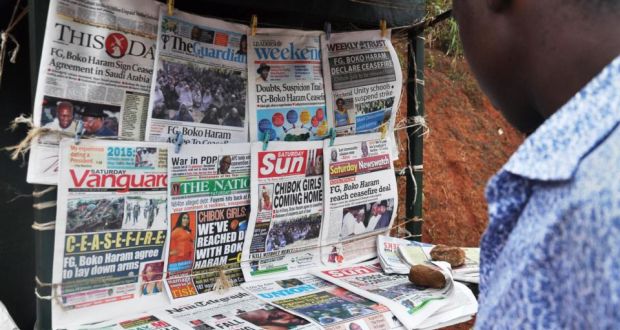 Nigerian Newspapers: Today Naija Headlines can be accessed below

1. The dollar exchanged at N600 on Monday at the parallel market, heightening fears of a further devaluation of the nation’s currency. The rate at the Importers and Exporters Window was, however, N415.75 on Monday, widening the exchange rate spread to N184.25.

2. The Economic and Financial Crimes Commission (EFCC) yesterday arrested Nigeria’s Accountant General of the Federation, Ahmed Idris. EFCC Head of Media, Wilson Uwujaren announced this in a statement on Monday.

4. Airline Operators of Nigeria (AON) has again complained of fuel scarcity, days after suspending flight shutdown. The body warned that the situation would worsen flight cancellations and delays in domestic operations. The spokesperson, Prof. Obiora Okonkwo issued a statement in Lagos on Monday.

5. The Nigerian Railway Corporation (NRC) has announced the resumption of the Abuja-Kaduna train services. The NRC in a statement signed by its Deputy Director, Public Relations, Mr. Yakub Mahmoud, said the service will resume on Monday, May 23rd 2022, about two months after the facility was bombed by terrorists.

7. Timipre Sylva, Minister of State for Petroleum, has withdrawn from the presidential race in the All Progressives Congress (APC) and has returned to work. It was gathered that Sylva withdrew having considered the enormous work at hand at the ministry.

8. Two gunmen enforcing the “sit-at-home” order of the outlawed Indigenous People of Biafra (IPOB) have been shot dead in Anambra State. According to the police, they were killed along Umunze road in Orumba South Local Government Area of Anambra State on Monday.

9. Gunmen suspected to be kidnappers have killed six persons in a village in Takai Local Government area of Kano State. Takai LGA in Kano south is about 80 kilometres from Kano metropolis, and shares border with several towns of Jigawa State.

10. The Department of State Services has reportedly arrested a blogger, Ahmed Olamilekan, for allegedly publishing a story on Ogun State Governor, Dapo Abiodun. The report was said to be based on Abiodun’s alleged criminal records in the United States.