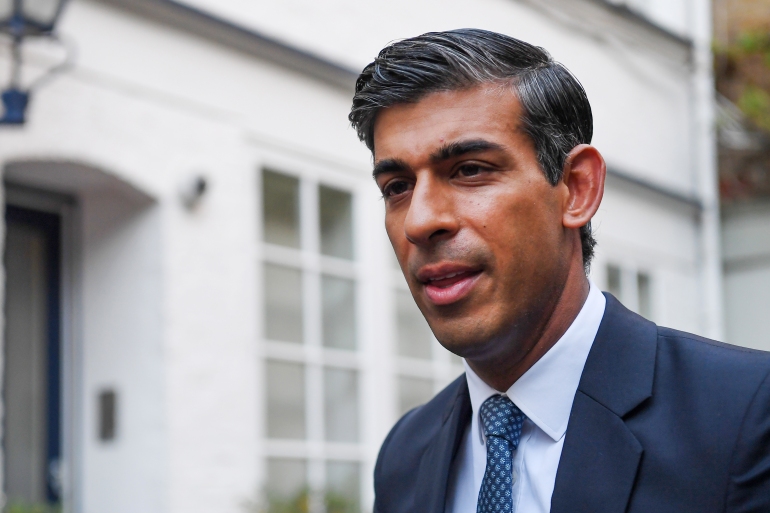 Penny Mordaunt is Sunak?s only challenger but trails way behind him in the MP vote.

Sunak’s win on Monday came days after Truss’s resignation following her disastrous tax cuts plans and policy U-turns plunged the markets into chaos. The unprecedented economic crisis drew a rare intervention from the Bank of England.

Sunak was to make his first remarks at 2:30pm (13:30 GMT), according to Party official Graham Brady, whose 1922 committee of Tory MPs organised a rapid leadership election following last week’s resignation of Truss.

He has been left with the task of steering a deeply divided country through an economic downturn set to leave millions of people poorer.

Sunak’s only challenger, Penny Mordaunt, leader of the House of Commons and former defence minister, was reportedly backed by 30 MPs compared with nearly 150 supporting Sunak.

“This decision is an historic one and shows, once again, the diversity and talent of our party,” Mordaunt said in a statement as she withdrew from the race just minutes before the winner was due to be announced. “Rishi has my full support.”

“These are unprecedented times. Despite the compressed timetable for the leadership contest it is clear that colleagues feel we need certainty today,” she said. “They have taken this decision in good faith for the good of the country.”

Sunak and Mordaunt had lost to Truss in an earlier race to appoint a new leader after then-Prime Minister Boris Johnson was forced to announce his resignation in July following a wave of scandals linked to parties entertained during the coronavirus lockdown.

Sunak, a former finance minister, will be Britain’s first leader of color and the first Hindu to take the top job. At 42, he’ll also be the youngest prime minister in more than 200 years.

The multi-millionaire former hedge fund boss will be expected to launch deep spending cuts to try to rebuild Britain’s fiscal reputation, just as the country slides into a recession, dragged down by the surging cost of energy and food.

He will also inherit a political party that has fractured along ideological lines, a challenge that damaged the fortunes of several former Conservative leaders.

While there were rumours over a Johnson’s comeback over the weekend, he pulled out of the contest on Sunday.

He said late on Sunday that he had secured the backing of 102 legislators and could have been “back in Downing Street”, but that he had failed to persuade either Sunak or the other contender, Mordaunt, to come together “in the national interest”.

“I believe I have much to offer but I am afraid that this is simply not the right time,” Johnson said.

The Tories retain a majority in parliament, meaning that as their leader, Sunak will be named prime minister by King Charles III.

Economists have questioned whether Sunak can tackle the country’s finances while holding the party’s multiple warring factions together.

Finance minister Jeremy Hunt – the fourth person in that role in four months – is due to present a budget on October 31 to plug a black hole in the public finances that is expected to have ballooned to up to 40bn pounds.