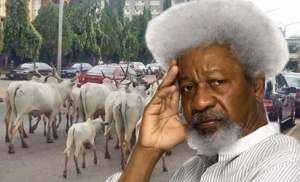 According to Soyinka, Nigeria would be doomed if the National Assembly passes the National Water Resources Bill.

Professor Soyinka who spoke Monday while presenting 107 copies of several books to Governor Samuel Ortom of Benue state for onward distribution to persons taking refuge in Internally Displaced Persons, IDPs, camps across the state, commended the Benue state Governor for always being on the side of truth.

Represented by the outgone State Chairman of Association of Nigerian Authors, ANA, Dr Charle Iornumbe, Prof. Soyinka said; “It must be resisted across board. No compromising or this nation is doomed, since it will be resisted by any and all means.”

While assuring that the book donation would be a continuous process, the Noble Laureate said, “this is my personal immediate donation. The idea is to widen the project and ask for contributions from one’s various contacts.”

He said the donation was in fulfilment of the pledge he made to the state government and IDPs the last time he visited the camps in the state.

Receiving the books, Governor Ortom described Prof. Soyinka a great Nigerian ho stood up for the state in her time of crisis and pain.

“Prof. Soyinka is a great Nigerian who stood with us during our trying times, despite his age he took time to visit us to give us support and also show solidarity which we cannot forget in a hurry,” Ortom said.

While commending the Noble Laureate for the donation, the Governor stated that the books would help encourage the children in IDPs camps across the state to embrace reading promising that this Education Commissioner would ensure the distribution of the books to the beneficiaries

Biden calls for end to ‘lawlessness’ in protest-hit US cities