Alhaji Tanko Yakasai, father to Kano Governor, Ganduje’s media aid, Salihu Tanko Yakasai has confirmed that his son has been arrested for calling for the resignation of President Muhammadu Buhari on Friday.

Following the news of the abduction of the students of the Government Girls Secondary School in Jangebe in Talata Mafara Local Government Area of Zamfara State on Thursday.

Salihu had questioned the All Progressives Congress, APC, government’s effort to protect its citizens, thereby calling for the resignation of the President.

The elder statesman did not, however, mention the very security outfit where the governor’s aide is being detained. 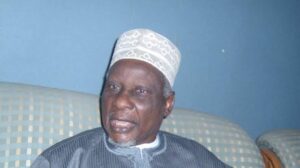 Yakasai said his son was arrested since Friday when he went to the barbing saloon.

Yakasai said, “He is in the custody of security and not kidnappers. I don’t know which of the security custody now because they (security) are many.

“He was picked yesterday (Friday) when he went to cut his hair at the barbing saloon when he was on his way returning. But there is nothing to worry about since he is with the security and not kidnappers,” Yakasai said.

Salihu, in his tweet had noted that the APC governments at all levels had failed particularly in the primary responsibility of securing the lives of the electorates who brought them into power.