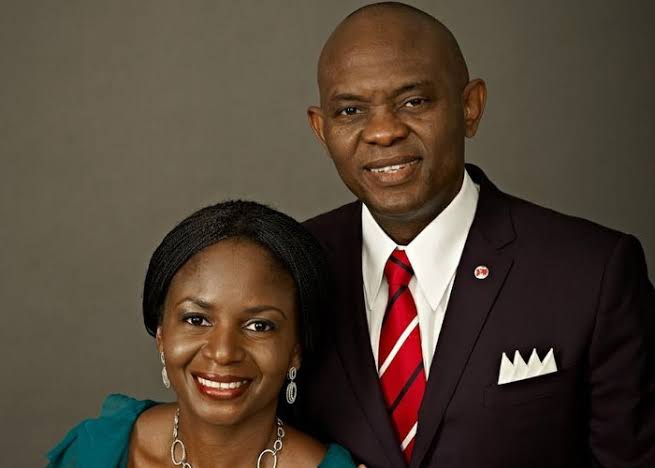 Have you ever pondered why the Elumelus have risen from grace to grace? The reason is simple: humanitarianism and philanthropy are in their blood.

This is because another silent philanthropist in the Elumelu dynasty is a renowned medical specialist.

Tony and his wife, Awele, are best described by the English adage “birds of a feather flock together.” Dragons marry dragons, and tigers marry tigers, is all that can be said. Tony and Awele are clearly destined to be together. The power duo has progressed from grass to elegance as a unit.

Dr. Awele, a trustee of the Tony Elumelu Foundation (TEF), is the brains and backbone of the foundation’s unwavering support for African women entrepreneurs.

Through the foundation, the extraordinary pair, whose marriage began in 1993, has empowered thousands of women and men throughout 54 African countries by catalyzing economic growth, pushing poverty eradication, and insuring job creation for over ten years.

Their devotion derives from Tony’s Africapitalism concept, which is based on the grandiose premise that the African private sector has the potential to reshape the continent.

Through its entrepreneurship programs, the foundation has trained, mentored, and funded over 10,898 young African entrepreneurs from 54 African countries.

Its digital networking platform, TEFConnect, has provided capacity-building support, advisory, and market linkages to over one million Africans.

Dr. Awele, the founder and chairman of Avon Healthcare Limited, an indigenous extended chain of clinics and healthcare facilities, was a participant in the TEF Entrepreneurship Program this year.

Ensured that the majority of the foundation’s yearly non-refundable grant to young African entrepreneurs went to women.

Dr. Awele, who turned 51 in June this year, is a unique jewel who has served as a role model for African business women.

She has also made significant contributions to humanity’s well-being through her field, in many ways.

Her altruistic deeds are unrivaled on the African continent by any other woman.

Being a female entrepreneur amid a sea of men, according to the superwoman, has its obstacles, but the rewards are priceless.

“Excellence is a mindset more than a competence. As a result, it is critical to succeed in entrepreneurship in every business.

Patience, positivism, confidence, curiosity, guts to stand out, toughness, and perseverance are all attributes that the woman must possess.” She’d stated.

Awele is not a complacent or lazy lady whose entire life revolves around her husband’s hobbies and accomplishments alone; she also takes on obligations that propel her to the forefront.

She possesses a Bachelor of Medicine and Bachelor of Surgery degree from the University of Benin and also handles the healthcare assets of Heirs Holdings, one of Tony’s companies.

She has worked in medicine, surgery, paediatrics, obstetrics & gynecology, and emergency medicine as a medical doctor.

Dr. Elumelu has worked at the Lagos University Teaching Hospital in Nigeria and Grantham and District Hospital in Grantham, England.