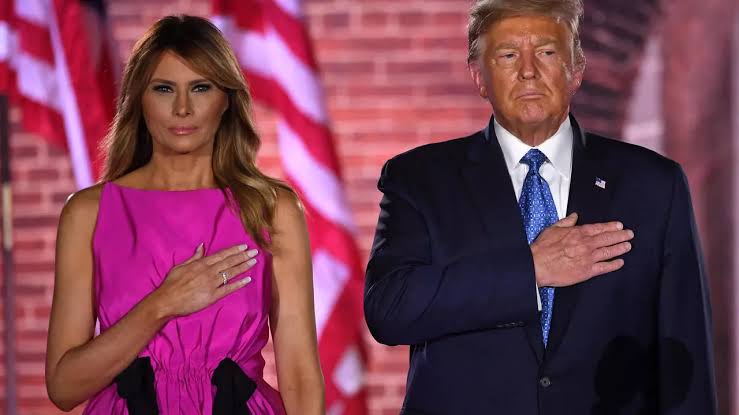 President Donald Trump and his wife, Melania, listen to the US national anthem during the third night of the Republican National Covention

US President Donald Trump accepts the Republican Party nomination for a second term on Thursday seeking to present himself to a nation on edge as the “law and order” candidate who will be the bulwark against “chaos” in American cities and the “radical left.”

The president’s live 10:30 pm (0230 GMT) speech from the White House, less than 70 days from the November vote, will close a Republican convention which has largely been the “Trump Show” and mostly virtual because of the Covid-19 pandemic.

It comes amid unprecedented health and economic crises, social unrest and protests for racial justice which have made the results of the matchup between the 74-year-old Trump and the 77-year-old Democrat Joe Biden all the more unpredictable.

For the past several days, protests and violence have rocked the small Wisconsin town of Kenosha, where a young African-American man, Jacob Blake, was shot seven times in the back by a police officer.

Trump seized upon the Kenosha unrest to tweet that he “will NOT stand for looting, arson, violence, and lawlessness on American streets.”

“I will be sending federal law enforcement and the National Guard to Kenosha, WI to restore LAW and ORDER!” he said.

Trump has presented the choice facing Americans in November in dire terms and his acceptance speech on Thursday is expected to reprise much of the same rhetoric.

“I’m the only thing standing between the American dream and total anarchy, madness and chaos,” he said last week.

In a prelude to Trump’s speech, Vice President Mike Pence told voters on Wednesday that they “won’t be safe in Joe Biden’s America” and cast Trump as their protector against socialists and the “radical left.”

– ‘Protesting brutality is a right’ –

The latest protests for racial justice and against police brutality raise challenges for both Trump and former vice president Biden.

Trump has played to his base by expressing his strong support for law enforcement and has yet to mention Blake by name.

Biden is being pulled in different directions — by the left of his party, which is calling to “defund the police,” and the right which is worried about losing voters wary of social unrest.

Biden for his part said the video of Blake’s shooting made him “sick” and “systemic racism” in American society must be eliminated.

“Protesting brutality is a right and absolutely necessary,” he said. “Burning down communities is not protest, it’s needless violence.”

“He’s rooting for more violence, not less,” Biden told MSNBC. “And he’s clear about that. And what’s he doing, he’s pouring more gasoline on the fire.”

The national polls and those in several battleground states currently give Biden the edge but Trump claims they do not reflect the true nature of the race and he will create another surprise like he did in 2016.

Trump’s speech will be closely watched for how he addresses the Covid-19 pandemic which has caused some 180,000 deaths in the United States.

While Trump has sought to minimize the worst health crisis in a century, his wife, Melania, took center stage at the convention on Tuesday to display the empathy he is so often accused of lacking.

Trump’s handling of the pandemic could be the factor which determines whether or not he wins another four years in the White House.

According to the website FiveThirtyEight.com, 58.2 percent of Americans disapprove of his response to the conronavirus crisis while 38.7 percent approve.

Democratic vice presidential candidate Kamala Harris is to give a speech hours before Trump’s appearance during which she is expected to attack his record.

A fireworks show is scheduled to end an evening that Trump hopes will help catapult him into a second term in the Oval Office.

Falana demands from CBN the beneficiaries Of N338.6bn COVID-19 Palliatives