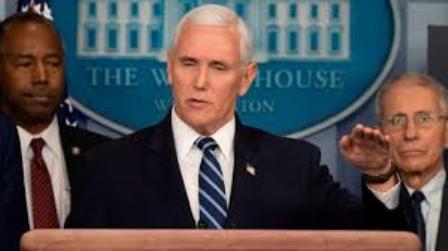 Pence will speak from Fort McHenry in Baltimore, the site in 1814 of a British bombardment against American revolutionaries that inspired the poem later turned into the US national anthem, “The Star-Spangled Banner.”

That backdrop will give Pence a cinematic opportunity to make the patriotic case for Trump getting a second term in elections November 3, when he faces Democrat Joe Biden.

A former congressman and governor of the midwestern state of Indiana, Pence has taken on the role of a calm counterweight to Trump’s constant drama, one who is impeccably conservative and manifestly religious.

Trump needs the well-organized evangelical Christian community to turn out to vote in what likely will be a tight election.

When Trump’s 2016 candidacy was almost derailed by the emergence of an old recording of him boasting about being able to grab women “by the pussy,” it was Pence who helped stem the damage.

Trump carries the baggage of a former playboy real estate tycoon — one who has faced multiple accusations of harassment and sexual assault.

But Pence has the look of a pious man, who reportedly refuses so much as to eat alone with a woman other than his wife, Karen.

And he is playing an important part in Trump’s reelection, crisscrossing the country, with an emphasis on swing states, to drum up support.

Pence has similarly served as the White House’s sober pointman on the coronavirus pandemic, which has killed nearly 180,000 Americans since Trump’s initial, erroneous prediction that it would disappear without trouble.

Where Trump has veered radically between dismissing the pandemic and grimly embracing a self-declared role as a “wartime president,” Pence has shouldered the unglamorous role of White House coronavirus task force coordinator.

Polls show that almost two-thirds of Americans are unhappy with Trump’s performance during the pandemic.

Pence’s opponent in the race, Democratic vice presidential pick Kamala Harris, will be attacking Trump on his coronavirus record at a speech on Thursday in Washington, DC, the same day that Trump is due to give his main acceptance speech of the Republican convention at the White House.

According to the Biden campaign, Harris will zoom in “on President Trump’s failures to contain Covid-19 and protect working families from the economic fallout.”

Pence is likely to use Wednesday’s speech to reassure voters that Trump has done everything possible to get the contagion under control and to care for an economy severely damaged by anti-virus shutdowns and social distancing.

The speech in Baltimore will follow two days of appearances by Trump boosters at the Republican convention, including First Lady Melania Trump, who on Tuesday defended the president as “an authentic person who loves this country.”

Trump has dipped repeatedly into his reality TV background to keep convention viewers on their toes — and himself in the camera frame.

On Tuesday, he made appearances in the White House, handing out a pardon to a convicted bank robber turned reform advocate, and attending a surprise naturalization ceremony for five new citizens.