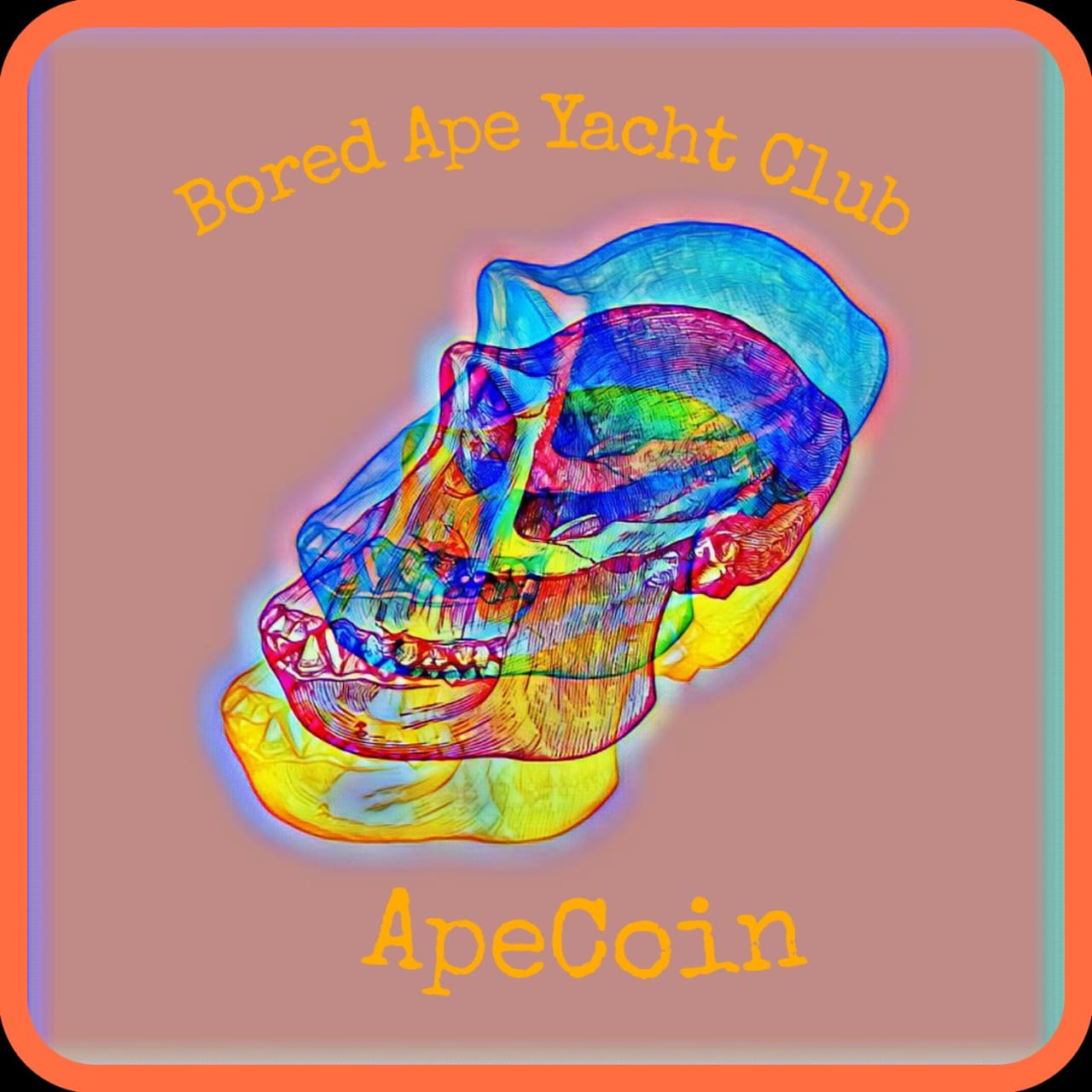 APECOIN – Members of the Bored Ape Yacht Club NFT collection will receive their own cryptocurrency, ApeCoin. which was unveiled earlier this week.

ApeCoin is closely associated with Yuga Labs and is expressly tied to these very expensive non-fungible coins.

Yoga Lab is the firm in charge of the Bored Apes’ intellectual property.

However, ApeCoin has been deliberately dissociated from any single traditional firm thanks to a well-coordinated marketing strategy.

ApeCoin is a product of ApeCoin DAO, a brand new organizational entity administered completely by token holders, according to the public relations campaign.

How Do You Become A DAO Member?

You can join the DAO (decentralized autonomous organization, a form of online community centered on crypto) simply by holding APE. You don’t even need to possess a Bored Ape NFT to do so.

ApeCoin is described as a “decentralized protocol layer for community-led initiatives that move culture forward into the metaverse” on its official website.

ApeCoin is an ERC-20 token, which is a type of Ethereum-based build-it-yourself cryptocurrency.

This system is used by the majority of the Ethereum-based social tokens that have gained popularity in the last year. (Think FWB, for the social club Friends with Benefits, and WRITE, for the Web 3 crowdfunding site Mirror).

Unlike NFTs, ApeCoins are intended to be “fungible” — like bitcoin (BTC), each ApeCoin should be worth precisely the same as the next.

On a decentralized exchange, a type of digital trading post for cryptocurrencies, you can freely buy and sell them.

The token was listed on almost every major centralized crypto market almost immediately after its introduction.

Given the famously fussy attitude of key companies like Coinbase, this was a significant achievement in and of itself (COIN).

ApeCoin has a market capitalization of about $2 billion after just one day of trading. One APE is currently worth roughly $14, and the total quantity of tokens is capped at one billion (not all of which is currently in circulation).

Who is Behind ApeCoin?

ApeCoin is being introduced by ApeCoin DAO, a new governing agency in which all APE holders are members, according to the ApeCoin website and AP materials. Its purpose is to collect community proposals, which token holders may subsequently vote on.

Similar voting structures have been tried in other NFT projects. When you buy an NFT from the “Nouns” collection. You become a member of Nouns DAO, an online investment collective with a $62 million treasury.

Nouns owners can determine what they want to do with the money as a group on a dedicated website for proposals. (A common suggestion is “What if we made an NFT comic book?”)

The Ape Foundation will handle day-to-day DAO administration, proposal management. And “other responsibilities that ensure the DAO community’s ideas have the support they need to become a reality,” according to the website. It’s the legal backing for ApeCoin DAO.

An ApeCoin DAO’s “board,” which will monitor specific proposals, will be made up of Ape Foundation subcommittee members.

The inaugural board of directors includes Alexis Ohanian, the co-founder of Reddit. Amy Wu, the head of FTX’s venture arm. Maaria Bajwa of Sound Ventures. Yat Siu of Animoca Brands; and Dean Steinbeck of Horizen Labs. Each board member will have a six-month term, and DAO members will be able to vote on future board members, according to the ApeCoin website.

Cartan Group, a Cayman Islands-based consulting firm, is being paid $150,000 per month for a six-month contract;

However, ApeCoin was not created by the Bored Ape investment community. This primate galaxy has a black hole at its heart.

What You Need To Know About Bored Ape Yacht Club

Yuga Labs is also in charge of all of the Bored Ape Yacht Club’s big initiatives and acquisitions. You’ll have to go through Yuga Labs if you want to do anything with Bored Ape IP.

“Yuga Labs will continue to be builders of products and experiences that offer fresh ideas and excitement to the community,” stated Yuga Labs CEO Nicole Muniz in a statement.

Yuga Labs has given the ApeCoin DAO treasury a one-of-a-kind NFT. “Adopt ApeCoin as the principal token for all future products and services,” the company says.

This ties its worth to the overall health of the Bored Ape collection. Despite this, Yuga Labs has stated that it is unrelated to ApeCoin.

“It’s certainly tempting to suggest that ApeCoin is from the Bored Ape Yacht Club to simplify things, but it’s not factual,” a press release from Strange Brew Strategies advises journalists.

The ApeCoin distribution methodology confuses the issue of agency even more.

Sixty-two percent of all ApeCoins will be reserved for token holders and the DAO’s treasury.

Anyone who has a mix of NFTs from the Bored Ape Yacht Club and its two spin-off collections for the first 90 days of ApeCoin’s existence.

Because APE has a fixed value and is already traded on major platforms, claiming these coins is similar to getting free money.

You are entitled to 10,094 APE for each Bored Ape you own. At today’s prices, that’s nearly $150,000 – roughly half of what you’d need to purchase yourself another Bored Ape.

The remaining 38% of ApeCoin is reserved for “early adopters” and the Jane Goodall Legacy Foundation, which supports conservation efforts for (real-life) rainforest primates.

Yuga Labs will get 150 million APE, with 10 million going to the Jane Goodall Legacy Foundation (“or equal value”).

The remaining 140 million APE will be distributed to “the companies and people that helped make this initiative a reality” — an unknown group that most likely includes Yuga Labs employees.

Yuga Labs’ founders will receive 80 million APE. For the first 12 months, all of these coins are “locked,” meaning that holders cannot cash out and cause the price to plummet.

The concept of a “free money” token claim for NFTs isn’t new. In September, a developer released “Adventure Gold” (AGLD), a cryptocurrency that works as a companion to the ascending NFT collection Loot.

Anyone possessing a Loot NFT was automatically entitled to a specific number of AGLD, and claiming those tokens meant instantly accumulating tens of thousands of dollars.

An NFT can act as a license to print money in this way. Yuga Labs claims no responsibility for ApeCoin, although it does take a sizable cut of the earnings.

What You Can Do With ApeCoin

ApeCoin is mostly used for speculation and “administration” of the DAO at the moment. Yuga Labs, on the other hand, has big plans for the token.

ApeCoin is being used as an in-game currency in the smartphone game Benji Bananas, developed by Animoca Brands (whose CEO, Yat Siu, is on the Ape Foundation’s board of directors).

A Benji Bananas Membership Pass costs 25 ApeCoins and allows you to earn “special tokens” in-game. After that, the tokens can be exchanged for ApeCoins.

Yuga Labs intends to use APE as its de facto currency for any new initiatives, so this is likely just the beginning of a large ecosystem powered by ApeCoin.

That’s also a legal consideration: the more you can do with the token other than speculate, the higher your chances of avoiding the SEC.

You may expect the use cases to, uh, evolve if the price holds and traders outside the Bored Ape Yacht Club ecosystem start taking positions in APE.