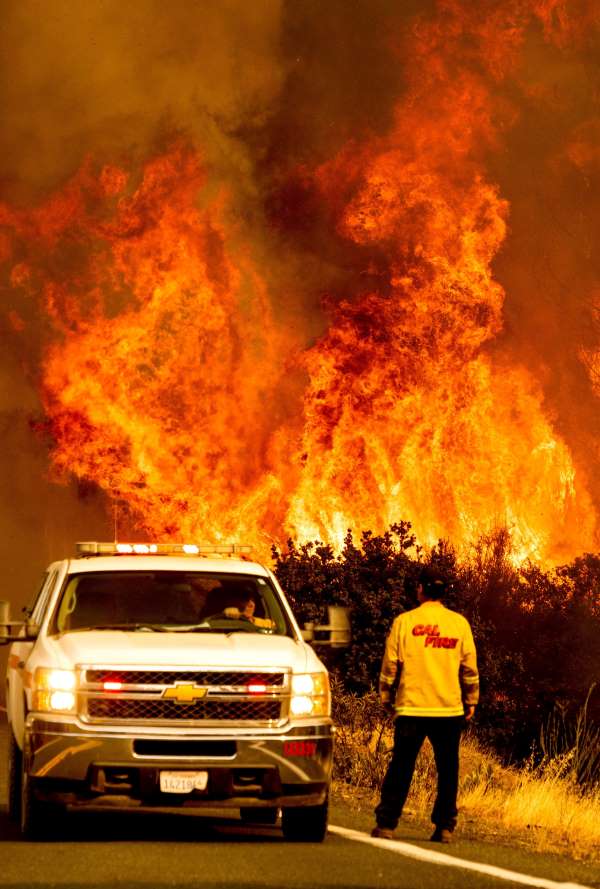 Wildfires ignited by lightning continued to rage Monday on all sides of the San Francisco Bay area, and much of Northern California was under a red flag warning as high winds with lightning threatened to spark even more flames.

Three vast blazes are scorching Northern California, and more than 650 wildfires, most sparked by lightning, have burned across the state in the last week.

READ MORE: Biden on shooting: “These shots pierce the soul of our nation”

However, firefighters received some help Monday from the weather as humidity rose and the lightning was kept at bay overnight. “Mother Nature’s helped us quite a bit,” said Billy See, the California Department of Forestry and Fire Protection (Cal Fire) incident commander for a complex of fires burning south of San Francisco.

At least seven people have died from the fires, including the first victim of the CZU Lightning Complex fire in the Santa Cruz Mountains, south of San Francisco, who was found dead Sunday.

Nearly a quarter-million people are under evacuation orders and warnings as weather forecasts signaled the looming threat of more lightning with hot temperatures and unpredictable winds.

Here’s what we know on Monday:

A lightning complex is a group of fires started by lightning strikes.

California fires: This is how a lightning storm can start a wildfire

According to Cal Fire, the LNU Lightning Complex in California’s wine country is expected to grow. “Fires continue to make runs in multiple directions, impacting multiple communities,” Cal Fire said. With more than 1,000 structures destroyed or damaged, and at least four fatalities confirmed since the fire started burning last Monday, the LNU Lightning Complex has been the most deadly and destructive in Northern California.

HD
OFF
Why wildfires in the western U.S. are only going to get worse

The Santa Rosa Press Democrat reported that the fire gained less than 3,000 acres over night and the expected lightning storms did not materialize.

The SCU Lightning Complex in the Santa Clara area “merged into two major fires and are broken into three zones,” Cal Fire says.

With both the LNU and SCU complexes burning more than 500 square miles, the fires have become two of the three largest fires in state history.

In the CZU Lightning Complex, the body of a 70-year-old man was discovered Sunday in a remote area called Last Chance. Approximately 77,000 people have been evacuated from the area of CZU complex, and more than 200 buildings have been destroyed, Cal Fire says.

“This is one of the darkest periods we’ve been in with this fire,” Santa Cruz Sheriff’s Department Chief Deputy Chris Clark said.

Across California, more than 12,000 lighting strikes have been recorded since Aug. 15, igniting hundreds of blazes. More than 14,0000 firefighters, 2,400 engines and 95 aircraft are combating the fires.

Other large fires included the Butte/Tehama/Glenn Lightning Complex west of Red Bluff and the River Fire south of Salinas, both of which had burned nearly 50,000 acres each.

According to the Los Angeles Times, wildfires have burned more than 1.2 million acres of land in California since last month. In all of 2019, which was a slow year for fires, only 259,000 acres, the Times reported.

In Southern California, several fires are burning around the Los Angeles area, including an 11-day-old blaze that held steady at just under 50 square miles.

The dry storms could bring more lightning strikes as well as gusty winds that could spread any fire started by the strike.

The red flag warnings were in effect through Monday night.

Mark Brunton, a battalion chief for Cal Fire, said firefighters are prepared for more flames, but he’s not sure what to expect.

“There’s a lot of potential for things to really go crazy out there,” he said.

Reports of ‘sickening’ looting of fire victims, including a firefighter

As tens of thousands have been forced from their homes, looters have taken advantage of the situation, local authorities have warned.

Brunton called the incident “sickening” and said the firefighter’s wallet was stolen and his bank account was “drained” while he was at work directing firefighting crews in the area.

Hart said his department has made eight arrests related to looting so far. Some of the looters have been from outside the area, he said. Others are neighbors. Looters have taken personal possessions inside homes and guns, for example. Hart added a story he heard about a group trying to take an outdoor heating system.

“I have no empathy, I have no patience for somebody who is going to come into our community and steal from people who have been who have been evacuated and victimized and traumatized,” Hart said.

With so many fires burning throughout the state, unhealthy air full of smoke continues to blanket the areas around the blazes and south in Central California.

The National Weather Service issued air quality alerts throughout much of the Bay Area and central California “until fires are extinguished.”

“Because of the number of fires we have in California, the smoke is just a lot more than normal,” said Dan Kottlowski, a senior meteorologist at AccuWeather. “As long as the fires are burning, you’re going to keep seeing smoke in these areas.”

Kottlowski said much of the smoke gets caught in Sacramento and San Joaquin Valleys, and the air flow often remains stagnant during this time of year. Warm weather can also create temperature inversions that trap the particulate matter in the lower atmosphere, worsening air quality over time, Kottlowski added.

The weather service’s office for the San Joaquin Valley in Hanford warned residents to “stay indoors if possible” and to avoid prolonged outdoor activity. Smoke was forecast to move north Monday, the office said.

Air quality index maps showed levels of fine particulate matter, or PM 2.5, in the air in parts of northern and central California as among the worst levels in the world.

How to stay safe from wildfire smoke

Wildfire smoke can irritate your eyes, nose, throat and lungs, make it hard to breathe and make you cough or wheeze, according to the Centers for Disease Control and Prevention,

To reduce exposure to smoke, the CDC recommends choosing a room that can be closed off to outside air. Place a portable air cleaner or filter in the room if possible, the CDC says, and wear a respirator to filter out smoke.

While most cloth or surgical masks will help prevent the spread of the new coronavirus, they don’t keep people safe from harmful particles in smoke. A mask designed to filter fine particulate matter, like an N-95, is best, though supplies are scarce because of the pandemic.

Kottlowski said the more layers, the better, if you don’t have access to a respirator. Some face coverings allow you to put an additional filter in to protect you from smoke particles, he said.

An air conditioning unit with high efficiency filters can capture fine particles from smoke, and setting the system to recirculate mode can prevent outside air from coming in. Also, avoid burning candles and frying or broiling meat, the CDC says.