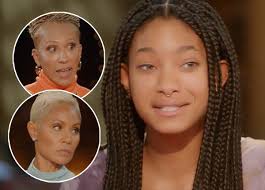 The reason why Willow is involved in multiple men was revealed by the United States of America’s singer who believes in multiple sex partners herself saying it is the right thing to do to check infidelity.

The songwriter, rapper, record producer, actress and dancer revealed that she is polygamous, an act of having romantic relationships with multiple partners, with the consent of all parties involved.

The singer and daughter of popular film producer, Willow Smith, made this known during an episode of the ‘Red Table Talk’, an original Facebook watch show.

Willow Smith co-hosts the show with her mother, Jada Pinkett; and maternal grandmother, Adrienne Bannfield. Willow disclosed her polyamory status during questions from her mother and grandmother concerning her relationship choice.

Her grandmother had said;

“For somebody like me, it feels like it’s really all just centered around sex,” though she admitted to having considered it herself.

However, 20-year-old Willow who was born on October 31, 2000 in Los Angeles, California, revealed that polyamory is more about freedom than about sex.

“why I have men is that with polyamory, I feel like the main foundation is the freedom to be able to create a relationship style that works for you and not just stepping into monogamy because that’s what everyone around you says is the right thing to do.”

Willow further revealed that the main cause for divorces in marriages is infidelity and she sees polyamory as a better option.