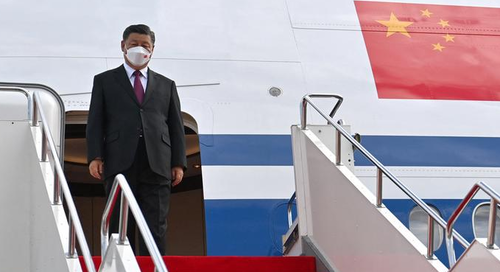 Chinese President Xi Jinping arrived in Kazakhstan on Wednesday, his first travel outside of China in over 21/2 years and since the coronavirus pandemic began.

When he arrived in Kazakhstan’s capital Nur-Sultan in the afternoon for a three-day journey that will also take him to neighboring Uzbekistan, he was received cordially by Kazakh President Kassym-Jomart Tokayev.

Xi’s entourage is made up of senior aides, his foreign policy chief, and top economic planning officials. According to the AP, “Tokayev’s government said the two leaders would discuss energy and trade. Kazakhstan, a sparsely populated country of 19.4 million people and sprawling grasslands, is a major oil and gas producer. China is a leading customer.”

But all eyes will be focused on scheduled events Thursday, when Xi is due to fly to Uzbekistan’s Samarkand eight-nation Shanghai Cooperation Organization (SCO) led by China and Russia, where he’ll meet with President Vladimir Putin and other Asia leaders, including Indian Prime Minister Narendra Modi and Turkish President Recep Tayyip Erdoğan, who will be in attendance.

In addition to China and Russia, the SCO is made up of Pakistan, India, Kazakhstan, Kyrgyzstan, and Tajikistan – with Iran and Afghanistan having observer status. The organization is intended as a counterweight to growing US-led alliances in Asia, with Xi expected to promote his own “Global Security Initiative”.

Observers and pundits in the West will without doubt eagerly await any comments from the SCO summit on the situation in Ukraine as well as summit commentary on US and European sanctions on Moscow.

The Kremlin earlier this month in a statement hailed “China’s balanced approach to the Ukraine crisis” and its “understanding” of what’s driving Moscow’s ‘special operation’ in Ukraine. And it must be recalled that just days before the Russian invasion of Ukraine, Moscow and Beijing had declared a “no limits” partnership amid a growing standoff with the West.

Russia’s Deputy Foreign Minister Roman Vassilenko called the planned Xi-Putin meeting “extremely important” and underscored ahead of the Chinese leader’s arrival, “We certainly hope that it will advance political and economic and commercial relations with China.”

Importantly, Ukraine will top the agenda alongside deepening economic ties, according to the latest statements from Moscow:

Xi and Putin plan to hold a one-on-one meeting and discuss Ukraine, according to the Russian president’s foreign policy adviser Yuri Ushakov.

Kazakhstan is part of China’s multibillion-dollar Belt and Road Initiative to expand trade by building ports, railways and other infrastructure across an arc of dozens of countries from the South Pacific through Asia to the Middle East, Europe and Africa.

The initiative and China’s economic inroads into Central Asia have fueled unease in Russia, which sees the region as its sphere of influence.

Kazakhstan and its neighbors are trying to attract Chinese investment without upsetting Moscow.

And as for Putin’s expected discussions with India’s Modi and broader strengthening of economic ties with New Delhi, a Kremlin statement said,

“There are plans to discuss issues of ‘saturation’ of the Indian market with Russian fertilizer and bilateral food supplies.”