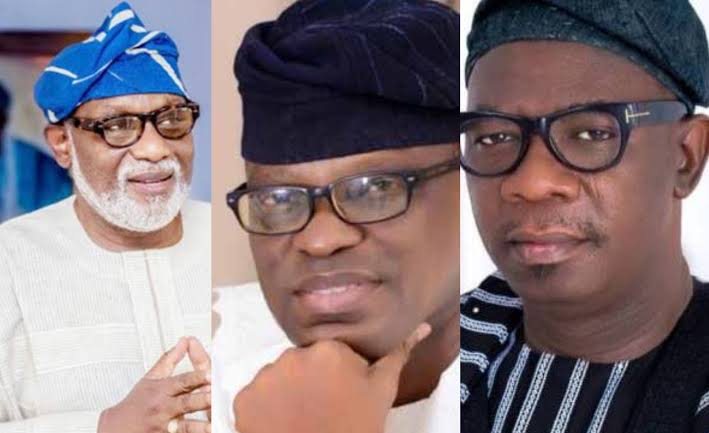 Ondo2020Election Live Updates and Situation Report has been compiled by iexclusivenews for your perusal.

iexclusivenews.com.ng reports that Ondo state has Eighteen (18) Local Government Areas (LGA’s) which are;

The iexclusivenews Ondo2020Election Live Updates reports that the LGA’s comprises of 203 wards, 3,009 polling units and no fewer than 17 political parties are registered to participate in today’s election exercise.

MEET THE CONTENDERS FOR THE ONDO2020 GUBER ELECTION:

The incumbent governor is seeking re-election under the banner of the APC . He had earlier served the state as attorney-general and was also a former president of the *Nigerian Bar Association (NBA).*

Mr Akeredolu hailed from Owo in Ondo North Senatorial District where he had his primary education. He attended Aquinas College in Akure, Loyola College in Ibadan, and the then University of Ife (now Obafemi Awolowo University) where he took his law degree.

The Senior Advocate of Nigeria hails from Akure, the capital of the state, in Ondo Central senatorial district.

He was the Chancellor of Anglican Communion of Jalingo, Taraba State. Mr Jegede is also a former Chancellor of Anglican Dioceses of Yola and a member of the Implementation Committee of the American University, Yola, Adamawa State, as well as a member, Chairman Board of Governors, ABTI Academy International School and member, Board of Trustees, Elizade University, Ilara Mokin, Ondo State.

Mr Jegede is one of the most popular candidates and has vowed to defeat other contestants.

Agboola Ajayi is a popular grassroots politician who has been in the game since the 80s under the Social Democratic Party (SDP), PDP and APC.

The lawyer and businessman was the chairman of Ese-Odo Local Government Area between 2004 and 2007.

He was later elected to the House of Representatives to represent Ilaje/Ese-Odo federal constituency under the PDP.

The Ese-Odo born politician in Ondo South dumped PDP for APC to run as the runningmate to Mr Akeredolu in the November 26, 2016 governorship election which they won.

Mr Adelegan is a public relations expert and the President and Chairman of Nigerian-British Chamber of Commerce and Industry.

Before he became the candidate of the ADC, he tried picking the race ticket of the APC under Unity Forum, an APC group formerly opposing the second term ticket for Mr Akeredolu.

He later decamped to become the candidate of the ADC.

The Young Progressive Party’s (YPP) candidate is the youngest person in the race. The 38-year-old candidate is a journalist and from the minority Ese-Odo council of Ondo South District.

He worked with many media organisations before moving into politics and is popular among the youth of the state.

Despite his minority background, he has boasted that he would win the election.

The candidate of the Accord Party has a history of speaking for the youth.

The political science graduate has boasted of getting the support of young people in Ondo but lacks strong structures.

Like the party’s presidential candidate in 2019, Omoyele Sowore, the candidate of AAC in Ondo State, Mr Adeleye has been making use of social media for his campaign.

He also campaigned among the youth with the #RevolutionNow campaign slogan as a way to effect positive change in the state.

The SDP’s candidate, Peter Fasua, said he has stepped down

According to the analysis of the buildup to the election, we understand that the incumbent Governor, Rotimi Akeredolu of The All Progressive Congress (APC), Eyitayo Jegede of The Peoples Democratic Party (PDP) and Agboola Ajayi of the Zenith Labour Party (ZLP) have emerged as the three top contenders for this election.

The Nigerian Police Force has deployed no less than 33,000 Security Personnels  for Saturday’s Ondo governorship election.

iexclusivenews also gathered that INEC is to engage no less than 17,000 Ad-hoc staff.

Today, Saturday, 10th of October, 2020, the eligible indigens of Ondo State will come together to cast their votes In favour of the Party (candidate) of their choice.

PHOTONEWS: Voters troop out at Ogbese, Akure North LGA as they await commencement of the election.

8am: Voters checking their names in preparation for accreditation at Unit 3, Ward 3 of Akure South LGA

9:05am: Ward 05 (Igoba/Isinigbo) PU 001, Akure North LGA A massive turnout of voters as voting continues at the unit peacefully. However, COVID-19 safety rules are openly violated.

9:00am: OSE LGA Ward 5 PU 003 (LA) Voting has started. Security are on ground and the atmosphere is peaceful. Voters are seen on their nose masks and they comply with Covid-19 guidelines.

officials have begun their duties and police officers are here ensuring orderliness. There’s no observance of the COVID-19 voting protocol.

The INEC officials have entered the hall and reset their tables. Security operatives are now letting voters in one after the other but the process is now extremely slow.

9:24am: PU 3, Akarigbo House, Ward 9, Irele 4, Irele LGA. Voters accreditation has not started. People are waiting in queues to vote.