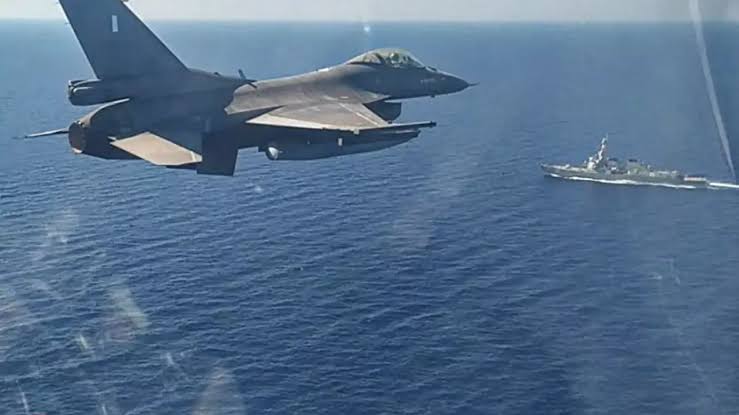 Turkey said on Tuesday it is ready for talks with Greece without preconditions about an escalating row over eastern Mediterranean gas that saw the two uneasy NATO allies stage rival military exercises.

The olive branch came ahead of an informal EU foreign ministers’ meeting in Berlin on Thursday and Friday at which Greece is expected to press the bloc to slap biting sanctions on its historic regional rival.

But EU nations would prefer to avoid irritating Turkish President Recep Tayyip Erdogan, and German Foreign Minister Heiko Maas shuttled between Athens and Ankara in a bid to temper the rhetoric and get talks back on track.

At stake is Europe’s secure access to newly-discovered gas reserves as well as the stability of both NATO and the entire volatile region, which includes war-torn Libya and Egypt.

Maas secured only lukewarm promises from Greek and Turkish officials, who continued to air their grievances in the dispute.

“We are in favour of negotiations for fair sharing (of the gas) but nobody should lay down preconditions,” Turkish Foreign Minister Mevlut Cavusoglu said after the talks in Ankara.

“This cannot happen with preconditions laid down by Greece.”

After his own meeting with Maas, Greek Foreign Minister Nikos Dendias said Athens was “ready for dialogue — but this dialogue cannot take place under (Turkish) threats”.

Completing his delicate mission, Maas conceded that the dispute had entered a “very critical” phase.

Nevertheless, “no one wants to solve this issue in a militaristic way,” Maas said through a translator, “and there is a willingness on both sides for dialogue.”

Greece’s maritime claims are backed by the entire EU, but the bloc has so far held back from heavily sanctioning Ankara out of fears that Erdogan would follow through with threats to unleash a wave of migrants now living in Turkey.

The top Turkish diplomat praised the German mediation effort but said Ankara had made a good faith gesture by announcing a pause to its exploration activity last month.

Cavusoglu argued that Turkey only resumed its work when Greece signed an agreement with Egypt to set up an exclusive economic zone on August 6, violating a general sense of goodwill.

The Greek parliament is expected to ratify the contentious agreement on Wednesday.

“I would like to advise Greece … to abandon its spoilt (behaviour),” Cavusoglu said.

“Act with common sense,” he told Athens, warning that Turkey was ready to “do what’s necessary without any hesitation”.

On Sunday, Turkey announced a decision to extend its exploratory ship Oruc Reis’s mission by an extra four days to Thursday, prompting an immediate Greek decision to carry out naval exercises nearby.

Greece has conducted exercises in the south of Crete with US forces, and is planning more war games with the United Arab Emirates’ air force.

Turkey and Greece have often been at odds and almost went to war over some uninhabited islets in the Aegean Sea in 1996.

Fellow EU heavyweight France has taken a tougher line against Ankara, sending warships to help Greece in the standoff.

Turkey is not only a longstanding ally within NATO, which includes many EU countries, but is party to a deal with Brussels to prevent uncontrolled migration to Europe, which dramatically split the bloc in 2015.

In Ankara, Maas said the Turkish-EU relations were “at a crossroads” but expressed Germany’s willingness to improve ties with Ankara, which he called a “strategic partner.”

Cavusoglu responded by urging Brussels to stop dangling the promise of EU membership should Ankara waive its rights in the eastern Mediterranean, saying it was “not realistic.”

“What we expect from the EU is to become an honest mediator,” he said.